Once again I have received some great information from fellow Cav Troopers located here in Texas.  Look, I know it is hard to ask for help however, it is time to push the fear of unknown aside and take your first step forward.

The mission of the Lancer Legacy Ranch empowers veterans to reclaim their lives by helping them identify obstacles to success, providing temporary housing when necessary and connecting them with medical, legal, educational, and employment resources within the community. These veterans then become instruments of service as we provide support to our community by giving food, clothing and labor to the needy.

This is where the ranch began. In the middle of a firefight in Sadr City, Iraq on April 4th, 2004. During a routine humanitarian patrol a platoon from the Lancer Battalion was ambushed by 10,000 members of a Shi’a Militia. With half their vehicles destroyed and casualties mounting, the platoon took shelter in a nearby alley. The battalion sprang into action by launching a rescue mission that would succeed but only at great cost. Seven Lancers and a tank crew member from another unit died before the fighting ended. On that day bonds were forged between men that I now call ‘brothers’.

The wars in Iraq and Afghanistan became a revolving door. Those of us who stayed in the service were often home only long enough to complete the year of unit training and refit period before going back to play in the sand box. The Lancer Battalion returned to Sadr City again by 2006 and stayed there for almost 16 months. For some, especially the veterans of the first deployment, this was just fine. Many were angry to still be alive and sought a warrior’s death to end the guilt of surviving. The year they had spent with loved ones had seemed strange. They had honed new skills and instincts in battle. But now they couldn’t turn them off.

As time wore on many warriors were no longer able to continue the grind, both physically and mentally. They got out, grew beards, collected guns and other things that reminded them of who they used to be. The 1st Cavalry Division erected a monument to the fallen from the 04-05 deployment. It became our touchstone, a rally point that we sought out on the anniversary of our first battle. Not many came at first. We preferred to lick our wounds alone or sought to medicate ourselves in isolation as we tried to make sense of how we came to be trapped inside ourselves, reliving our worst day over and over.

Members of Red Platoon, Charlie Company 2/5, the Lancer Battalion of 1st Cavalry Division began Lancer Legacy Ranch on Memorial Day of 2015. We were the ones who felt a keen sense of debt to the men and women of our battalion task force who had, without any regard of their own safety, rode to our rescue in the back of unarmored trucks. Our very lives were a gift and we wanted to return the favor by making a difference in the lives of other veterans. Our chief advantage was the experience of combat and PTSD that provided a baseline of trust with service members. It is often difficult for civilian counselors to bridge that gap and create a rapport. In our case, veterans who show up with those issues automatically know that we get it.

Here is their plan to help our 1st Cavalry Division Veterans:

We can do this a few ways.  One, we can provide a place for male veterans to decompress for 1 to 2 weeks.  During that time we will feed them, provide individual peer-based counseling, group counseling, bring in professionals in their field of interest (law enforcement, vocational, medical, etc) to mentor them, offer outdoor activities (marksmanship, archery, fishing, etc) and a space for any creative endeavors they wish to pursue.
Second, we can do all of the above in a long term format.  The goal here would be to help them achieve stability in all areas of life and then send them out to be productive, self-reliant citizens.  There is no time limit for this as everyone has different needs.
If you have any that want to get into the ranching industry, we have a 500 acre cattle ranch near Waco run by a 7th Cav veteran of the Ia Drang Valley, Johnny Scott.  He will put up male or female who want to learn how run cows for profit.  The fact that he was paralyzed from the chest down in combat doesn’t slow him down a bit and gives him serious credibility with wounded warriors.  In fact, I think he would be a good candidate to come rally your troops from time to time.
Last, we have Eric Bourquin in Round Rock who will take folks out carp fishing on a weekend.  Nothing better than drowning worms to get rid of stress.  Also, Eric is an alumni of Fort Hood’s WTB who has overcome serious obstacles and has demonstrated success in transitioning from warrior to civilian. 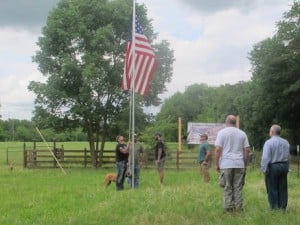