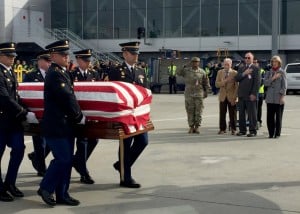 Their stories are heartbreaking. For decades, thousands of families – over 7,800 from America and 100,000 from Korea – have wondered how and when their son, husband, brother, or uncle died during the Korean War. They’ve spent a lifetime hoping their loved one would return. But there has been only silence. No letters. No calls. No military officials knocking at the door.

With improvements in DNA testing, however, things have changed. Over the past ten years, thousands of American and Korean men killed during the three-year conflict and listed as Missing in Action (MIA) have been found, identified, and returned to their loved ones.

Last year I visited the National Museum of Korean Contemporary History and toured an exhibit that explained how servicemen from the Korean War are recovered and identified. It was a sobering afternoon. As I quickly discovered, searching and digging for human remains is a painstaking and meticulous job.

Once the backbreaking work is completed and a bone or tooth is found, the scientists step in. The remains are tagged, cleaned, analyzed with 3-D scanners, and tested for DNA. It’s a time-consuming and costly process, but as MIA families can verify, well worth it. The ROK and US governments are determined to find, identify, and return all the missing bodies. With thousands still unaccounted for from both countries, however, they have a long way to go. But they’re making progress.

We now frequently read stories of teary-eyed sons and daughters, sisters and brothers, and family members welcoming home their long-lost relative. They’ve waited a lifetime to do what most of us have always taken for granted: bury their loved one, visit a gravesite, put flowers around a tombstone, and talk proudly about the deceased person’s life. For many MIA families, unfortunately, these important rituals never happen.

But when they do, I notice that these families seem proud, grateful, and at peace. There’s rarely bitterness or anger. Instead, they’re genuinely thankful for the dedicated employees and volunteers of government agencies, non-profit organizations, and religious institutions who have helped bring a sense of closure to a painful, seemingly endless chapter of their lives.

So many people have made it a priority to see that every serviceman is remembered. As Chuck Pritchard, a spokesman for the US POW/MIA Accounting Agency, puts it, “As a nation, we hold the belief that no American should go forgotten.”

After reading the poignant stories of men who fought and died during the Korean War and have finally come home, I’m reminded that it’s their remains, usually teeth, bones, sometimes a wedding band, class ring, or dog tag, that are returned. Nothing else is left. Buried in shallow graves or only covered in thin layers of debris, their bodies decomposed quickly, just months, maybe a year, after they died.

I’m also reminded that in many cases their parents and siblings have all passed away. For many parents and wives who suffered a lifetime of grief and pain not knowing what happened to a loved one, the good news never came, or it came too late.

Last week I read a moving story about US Army Private First Class James J. Leonard, Jr., of the 8th Cavalry Regiment, 1st Cavalry Division. He graduated from San Francisco’s Polytechnic High School in 1946, where he’d been runner on the track team and a trumpeter in the school’s band. He died fighting in Korea in July 1950.

His remains were returned to his family two months ago after a Korean road construction crew found his teeth, a helmet, and boot. Only one family member who knew PFC Leonard, his 92-year old cousin, James Hart, was there for the homecoming. His parents and only sibling have been dead for years. “He was only 22 years old,” Mr. Hart said about his cousin. “He had his whole life ahead of him.”

Tragically, PFC Leonard’s story is not unique. Thousands of men and their families have suffered the same fate. When we think about war we all too often forget about the parents, wives, and children who said good-bye to a loved one and never saw them again, never even knew how they died or if they were buried. What these families have endured is unimaginable to most of us.

As we hear and read about MIA’s being found and returned to their families, let us hope that when our servicemen and women are put in harm’s way, they will never have the three letters, M — I — A, attached to their names.