One of the most awe-inspiring yet historically little remembered missions of World War II in the Pacific were the four rapid-fire prisoner of war liberation raids in the Philippines. 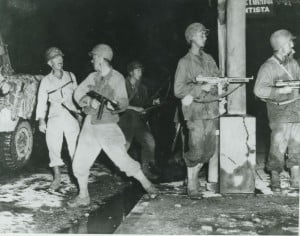 One of the most awe-inspiring yet historically little remembered missions of World War II in the Pacific were the four rapid-fire prisoner of war liberation raids in the Philippines. These four raids, Bilibid, Cabanatuan, Santo Tomas, and Los Banos, all took place in a one-month period between late January and the end of February, 1945, and the men who planned them faced many of the elements of potential failure; the raids, with the exception of the Bilibid liberation in Manila, were independently planned in very restrictive time-frames by at least three different headquarters; they involved every branch of the American military, with enormously important help from, and sacrifice by, the Filipino people and their guerrilla Army; and they employed practically every method of attack and means of transportation known to man. In spite of all this potential for confusion and failure, each of the rescues was pulled off without a hitch. These prisoner raids – collectively – killed, wounded, or scattered about a thousand enemy troops and resulted in freedom for almost eight times that many allied prisoners of war, including the largest number of American civilian internees ever taken prisoner by an armed enemy in the history of our nation. All of this while sustaining relatively light – though certainly not insignificant – causalities among the American forces and their supporting Filipino guerrillas.

Legend has it that General MacArthur was so impressed by the Cabanatuan raid by elements the 6th Ranger Battalion – which was still in progress at the time – that he went immediately to MG Mudge’s 1st Cavalry Division headquarters in Guimba. There he ordered the formation of a ‘Flying Column’ to accomplish the same thing with the 3,700 civilians interned at the University of Santo Tomas in Manila. Nobody knew about the 1,300 or so military and civilian prisoners at the old Bilibid prison which was only a few blocks from Santo Tomas.

The oratory attributed to the general during this conference was typically MacArthur: “Go to Manila! Go over the Japs, go around the Japs, bounce off the Japs, but go to Manila! Free the prisoners at Santo Tomas and capture Malacanang Palace and the legislative buildings.”

Two-thirds of this grandiose mission was practicable from where the 1st Cavalry Division sat. Santo Tomas and Malacanang Palace were in the north end of Manila, the same side that the 1st Cav was on, but the legislative buildings were on the south side of the Pasig River. This large river runs east-to-west through the middle of Manila and there were only three or four bridges across it. The chances of the Japanese destroying the bridges and turning the river into a major obstacle were pretty good. If the Japanese managed to do this, it would make the legislature buildings relatively hard to reach.

When MacArthur decreed the formation of the ‘Flying Column’ the 1st Cav troops, to whom he had decreed it, had come ashore at Lingayen Gulf on 27 January. 1945 after 72 days of continuous combat in the mountains of Leyte, and the division had just completed its move 35 miles south from Lingayen to Guimba, arriving there on the 30th. As fierce as the combat on Leyte had been, the memory that usually gets shared by the 1st Cav Troopers that were there is the fact that during 40 of those 72 days, 35 inches of rain fell. The Troopers had earned some rest, but there was to be none. They received “MacArthur’s Flying Column” decree on the day after they arrived at Guimba. MG Mudge spent the rest of the 31st gathering the troops he thought it would take to accomplish his new mission. These troops included, in addition to parts of the 5th Cavalry and 8th Cavalry Regiments and some miscellaneous support people, the 44th Tank Battalion, a bunch of air cover from Marine Group 24 and 32 and – luckily – a Navy demolitions expert, Lieutenant (JG) James Patrick Sutton. MG Mudge divided the Column into three serials, assigning missions to each, and, at one minute past midnight on the morning of 1 February, 1945, led them out of Guimba. The race to Manila was on!

The Column, carrying only four days’ rations and the absolute minimum in arms, ammunition and fuel, had to tread carefully for the first few miles because the Cabanatuan prisoners were still being evacuated across its path. Once in the clear, however, it fought its way at top speed down Highway 5, slowing for a day of heavy firefights at Cabanatuan and Gapan. An ambush at a road intersection during the fight at Gapan cost the life of LTC Tom Ross, commander of the third serial. This was the serial with most of the 44th Tank Battalion assigned to it.

After this fierce early fighting the Column sped south, depending totally upon the Marine flyers for flank security. The 1st Cav moved toward Manila, pausing only to bypass blown bridges and to engage the Japanese in hit-and-run fighting. It hit a snag however, at the Novaliches Bridge just south of a road junction that became known as “the Hot Corner”. They were still about ten miles short of Manila.

Mines had been set, the fuse was lit, and the Japanese were laying down heavy sniper fire on the bridge to discourage all efforts to prevent its destruction. Bypassing this particular bridge was not an option because the gorge was deep and the river was swift. It was here that having Pat Sutton along turned out to be a stroke of good fortune. He, apparently protected by some sort of a providential Star Trek force field that seemed to repel sniper bullets, ran out on the bridge and cut the demolition fuse, enabling the Column to cross the river with dry feet.

LT Sutton also helped in clearing a path through a minefield further south on the approach to Manila. His next running – with his brand new Distinguished Service Cross – was for Congress where he won a Tennessee seat in the House of Representatives.

After the Column crossed the river at Novaliches it moved down Quezon Boulevard straight toward Santo Tomas Internment Camp and Malacanang Palace.

Inside the Prison Camp

Inside the prison camp, 3,700 apprehensive civilian men, women and children were watching the approach of the tracer-bullet fireworks in the evening sky with a strange mixture of excitement and dread. After three years in the “protective custody” of the Japanese Army, they were excited that SOMETHING was happening – even if they didn’t know what it was – but mixed in with this excitement was dread of the possibility that the pyrotechnic display was, in truth, being caused by the bad guys headed their way with malice in their souls. Rumors had been rampant for some time that the Japanese intended to kill all of their prisoners.

Late on 3 February, 1945, after a couple of wrong turns and some heavy fighting in the mixed-up outskirts of Manila, the Santo Tomas column picked up CPT Manuel Colayco, a Filipino newspaperman and clandestine intelligence officer, who guided them to the main gate of the prison camp. At about nine in the evening, after a brief flurry of resistance by the Japanese guards during which CPT Colayco was fatally wounded by a grenade explosion, the 44th Tank Battalion’s M-4 Sherman “Battlin Basic”, closely by the “Georgia Peach” knocked down the gate and the war was nearly over for the internees.

The Flying Column was 66 hours into its mission. With time out for the fights at Cabanatuan and Gapan, and delays in bypassing some of the blown bridges, it had covered 100 miles. The 1st Cav had toeholds – tenuous as they might actually have been – at Santo Tomas and at the Malacanang Place.

For the Santo Tomas internees, their liberation was followed by a night of delirious happiness, a standoff and hostage crisis in one of the campus buildings, and two or three days of murderous artillery dueling.

The artillery battle resulted when the few hundred men of the 1st Cav, not having all that much Manila real estate under their control, had to set up their artillery inside the Santo Tomas complex and begin making enough noise to discourage thoughts of counterattack in the minds of Admiral Iwabuchi and his twenty thousand marines defending Manila. The good news was that no counterattack materialized; the bad news was that the presence of American artillery in the front yard invited counterfire from the Japanese, and the internees were in the middle. This several day artillery duel caused the only prisoner causalities of the Santo Tomas liberation – with the possible exception of a couple of internees who reportedly ate themselves to death in the first day or so. Seventeen internees and several 1st Cav Troopers were killed in this exchange of fire and many more were injured.

After the shooting died down, only a couple of months of stomach aches from the unaccustomed good food and headaches from the seemingly endless interminable processing stood between the ex-prisoners and, for many of them, repatriation.

*This is an excerpt from a paper by Peter R. Wygle entitled “Jeb Stuart Would Have Loved It!” that covers the four mentioned POW camps. Pete Wygle was a civilian internee at the Santo Tomas Internment Camp, a boy of about ten or 11 years old at the time. He also authored the book, “Surviving a Japanese POW Camp”, served on active duty in Korea and later in the Army National Guard retiring as a Colonel. He was also very active in the American Ex-Prisoners of War Association. Pete died of cancer in September 2003. Pete’s widow, Nancy, graciously provided a copy of this paper for inclusion in the 1st Cavalry Division Museum archives. Edited for publication in SABER by Robert W. Tagge, Member of the Board of Governors, 1st Cavalry Division Association and Executive Director of the 1st Cavalry Division Museum Foundation.