The 26th Marines at Khe Sanh were besieged by heavy artillery bombardment and ground attack. 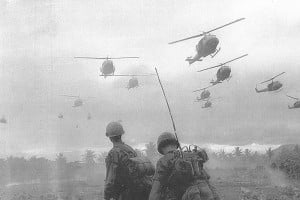 Throughout the weeks that the 1st Cavalry Division was engaged in the Tet Offensive, the 26th Marines at Khe Sanh were besieged by heavy artillery bombardment and ground attack. The North Vietnamese had ringed the lines of the Marines with a buildup of entrenched infantry and a multitude of antiaircraft weapons. On 11 March 1968, at the request of the Marine Command, the 1st Cavalry Division began a detailed plan, Operation PEGASUS, designed to relieve the Marines at Khe Sanh.

It became evident during the planning that the construction of an airstrip in the vicinity of Ca Lu would be a key factor for the entire operation. The airstrip, which became known as LZ Stud, had to be ready well before D-day (1 April 1968). Also, it was necessary to upgrade Highway Nine between the “Rock Pile” and Ca Lu to allow pre-stocking of supplies at LZ Stud. Construction of the airstrip and road improvements were assigned to a team of the 1st Cavalry Division’s 8th Engineer Battalion, the Seabees’ USN Mobile Construction Battalion #5, and the 11th Engineer Battalion,

Having established a forward base of operations, the second key element to the success of this plan was the closely integrated reconnaissance and fire support effort of the 1st Squadron, 9th Cavalry and air, artillery, and B-52 arc light strikes which were carried out during the 6 days preceding the launch of the main attack.

On 30 March the 1st Squadron, 9th Cavalry began operations from LZ Stud in gradually increasing concentric circles up to the Khe Sanh area, working with air cover from the 7th Air Force or the 1st Marine Air Wing. The Cavalry Squadron was almost the only means available to pinpoint enemy locations, antiaircraft positions, and strong points that the division would try to avoid in the initial assaults. The squadron was also responsible for the selection of critical forward landing zones. Their information proved to be timely and accurate.

The bad weather of D-day was to haunt the 1st Cavalry throughout Operation PEGASUS. “Good weather” was considered to be any condition when the ceiling was above 500 feet and slant range visibility was more than a mile and a half. The bad weather further proved the soundness of establishing LZ Stud as the springboard for the assaults. Troops, ammo and supplies could be assembled there ready to go whenever the weather to the west opened up. Marshalling areas further away would have drastically deteriorated response time.

On 2 April, the 1st Marine Regiment continued its ground attack along the axis of Highway 9. Two Marine companies made limited air assaults to support the Regiment’s momentum. The 3rd Brigade air assaulted the 2nd Battalion, 7th Cavalry into a new position further to the west while the other two battalions improved their positions. The 2nd Brigade moved into marshalling areas in preparation for air assaults the next day.

The initial thrusts had met less enemy resistance than expected. As a consequence, the 2nd Brigade was thrown into the attack a day earlier than the original schedule with its three battalions, the 1st and 2nd Battalions, 5th Cavalry and 2nd Battalion, 12th Cavalry. These battalions moved into two new areas south and west of our earlier landing zones. Under enemy artillery during the assaults, their objectives were secured without serious difficulty.

On 4 April, the 2nd Brigade assaulted one battalion into an old French fort south of Khe Sanh. Initial contact resulted in four enemy killed. Continuing the attack the next day, heavy resistance was encountered.

On 6 April, units of the 1st Brigade entered the operation with the 1st Battalion, 8th Cavalry and 1st Battalion, 12th Cavalry air assaulting into LZ Snapper, due south of Khe Sanh and overlooking Highway 9. The circle began to close around the enemy. As units were airlifted into the various LZs along Highway 9, they did not have the knowledge of the final operational plans. It had been decided by the 1st Cavalry Divisional Tactical Operation Center (DTOC), at Camp Evans, to only provide for their general distribution once all of the units were at final attack positions. With all units in position, a courier was dispatched to carry the plans to the commands of all units and the Marines at Khe Sanh.

The heaviest contact on that date occurred in the 3rd Brigade’s area of operation as the 2nd Battalion, 7th Cavalry continued its drive west on Highway 9. Enemy blocking along the highway offered stubborn resistance. In a day-long battle which ended when the enemy summarily abandoned his position and fled, the battalion had accounted for 83 enemy killed, captured one prisoner and 121 individual and ten crew-served weapons. The troops of the 1st Cavalry Division were airlifted to Hill 471 relieving the Marines at this position. This was the first relief of the defenders of Khe Sanh. Two companies of Troopers remained on the hill while two other companies initiated an attack to the south toward the Khe Sanh Hamlet.

The 1st Cavalry Division forces on LZ Snapper were attacked by an enemy force utilizing mortars, hand grenades, and rocket launchers. The attack was a disaster for the enemy and twenty were killed. At 1320 hours the 84th Company of the Vietnamese 8th Airborne Battalion was airlifted by 1st Cavalry Division aircraft into the Khe Sanh Combat Base and linked up with elements of the 37th Ranger Battalion. The lift was conducted without incident and was the official link-up in forces at Khe Sanh.

On 7 April, the South Vietnamese III Airborne Task Force air assaulted three battalions into positions north of the road and east of Khe Sanh to block escape routes toward the Laotian border. Fighting throughout the area was sporadic as the enemy attempted to withdraw. American and South Vietnamese units began picking up significant quantities of abandoned weapons and equipment. The old French fort which was the last known enemy strong point around Khe Sanh was completely secured.

At 0800 hours on 8 April, the relief of Khe Sanh was effected and the 1st Cavalry Division became the new landlord. The 3rd Brigade airlifted its command post into Khe Sanh and assumed the mission of securing the area. This was accomplished after the 2nd Battalion, 7th Cavalry successfully cleared Highway 9 to the base and effected link-up with the 26th Marine Regiment. The 3rd Brigade elements occupied high ground to the east and northeast of the base with no enemy contact. At this time it became increasingly evident, through lack of contact and the large amounts of new equipment being found indiscriminately abandoned on the battlefield, that the enemy had fled the area rather than face certain defeat.

On 9 April, all 1st Marine Regiment objectives had been secured and Highway 9 was repaired and secured with only scattered incidents of enemy sniper fires. Enemy mortar, rocket and artillery fire into Khe Sanh became increasingly sporadic. Mop up operations continued.

On 10 April, pursuing the retreating North Vietnamese, the 1st Battalion, 12th Cavalry recaptured the Special Forces camp at Lang Vei, four miles west of Khe Sanh and seized large stockpiles of supplies and ammunition. This action became the last major encounter with in Operation PEGASUS as later in the day, orders were received to extract the 1st Cavalry Division as soon as possible to prepare for Operation DELAWARE/LAM SON 216, an assault into the A Shau Valley. Advance units started the pull out the next day and returned to the base areas at Quang Tri City and Camp Evans.

Limited operations continued until 15 April 1968 when Operation PEGASUS was officially terminated. The 1st Cavalry Division had scored a major airmobile victory by quickly reaching the besieged Marines Khe Sanh bastion without setbacks or heavy losses. The careful planning and preparation preceding the raid was backed up by aggressive and innovative tactics during its execution. The final statistics of Operation PEGASUS totaled 1,259 enemy killed and more than 750 weapons captured.

Excerpted from the Division’s history at www. first-team.us. Written by William H. Boudreau, Historian of the 1st Cavalry Division Association.