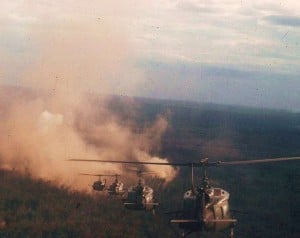 The 1st Cavalry Division (Airmobile) and attached units, distinguished themselves by outstanding performance of duty and extraordinary heroism in action against an armed enemy in the Republic of Vietnam during the period 23 October 1965 to 26 November 1965.

Following the attack on a Special Forces camp at Plei Me, in Pleiku Province, on 19 October 1965 by regular units of the Army of North Vietnam, the 1st Cavalry Division (Airmobile) was committed to action. The division was initially assigned the mission of protecting the key communications center of Pleiku, in addition to providing fire support both for an Army of the Republic of Vietnam (ARVN) armored column dispatched to the relief of the besieged camp, and for the camp itself. The 1st Cavalry Division (Airmobile), having recently been organized under a completely new concept in tactical mobility, and having arrived in the Republic of Vietnam only a month earlier, responded quickly with an infantry brigade and supporting forces.

Using air assault techniques, the division deployed artillery batteries into firing positions deep within enemy-held territory and provided the vital fire support needed by the ARVN forces to accomplish the relief of the Special Forces camp. By 27 October, the tactical and strategic impact of the presence of a North Vietnamese regular army division in Pleiku Province necessitated a change in missions for the 1st Cavalry Division.

The division was given an unlimited offensive role to seek out and destroy the enemy force. With bold thrusts, elements of the division pursued the North Vietnamese regiments across the dense and trackless jungles of the west-central highlands, seeking the enemy out in his previously secure sanctuaries and giving him no quarter. In unfavorable terrain and under logistical and tactical conditions that would have stopped a unit with less capability, motivation and esprit, the cavalrymen repeatedly and decisively defeated numerically superior enemy forces.

The superb training, unflinching devotion to duty, and unsurpassed gallantry and intrepidity of the cavalrymen, individually and collectively, resulted in numerous victories and succeeded in driving the invading North Vietnamese division back from its positions at Plei Me to the foot of the Chu Pong Massif. There, in the valley of the Ia Drang, the enemy was reinforced by a fresh regiment and undertook preparations for more incursions into Pleiku Province. The 1st Cavalry Division deployed by air its men and weapons to launch an attack on this enemy staging area, which was 35 kilometers from the nearest road and 50 kilometers from the nearest logistical base.

Fully utilizing air mobility in applying their combat power in a series of offensive blows, the men of the division completely defeated the numerically superior enemy. When the enemy finally withdrew his broken forces from the battlefield, the offensive capability of the North Vietnamese Army in the II Corps tactical zone had been blunted. The outstanding performance and extraordinary heroism of the members of the 1st Cavalry Division (Airmobile) and attached units, under the most hazardous and adverse conditions, reflect great credit upon themselves, the United States Army, and the Armed Forces of the United States.

General Orders No. 40
Headquarters, Department of the Army
21 January 1967