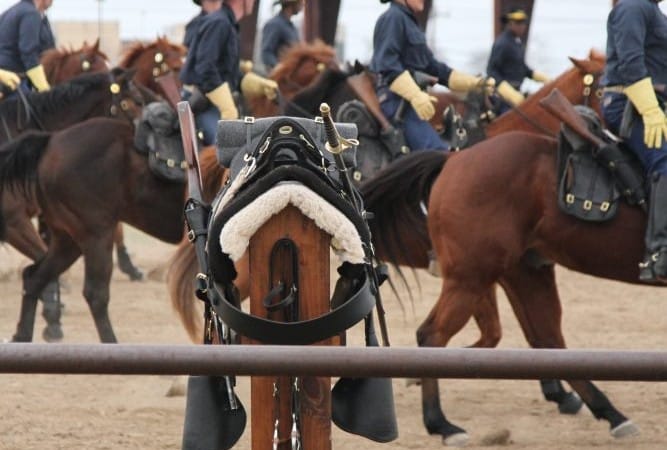 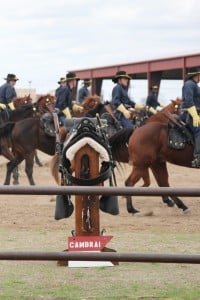 FORT HOOD, Texas — In a ceremony fit for any Soldier who passed while on active duty, leaders from across 1st Cavalry Division and Fort Hood gathered Friday for a memorial ceremony at the 1st Cavalry Division Horse Cavalry Division to honor more 20 years of faithful service of a mount named Cambrai.
Cambrai was sent to greener pastures earlier this month after it was determined that he suffered from chronic la

minitis and an injured stifle joint that left him unable to stand comfortably or without continued injury to himself.
Capt. James Nance, the commander for the detachment, said that a full memorial ceremony is traditional for a horse that has served an entire career at the detachment.
Nance said that the relationship between a Cavalry Trooper and his mount is a special one.
“You become one, and you learn from each other,” Nance said. “I tell everyone every day that I have never had a job where I have learned more about myself than out here riding horses. You learn so much about how you carry yourself, how you ride, how you’re seated, and how you’re presenting yourself, because your horse is going to react to how your weight is distributed.”
Cambrai came to the detachment in 1995 and was a fully operational mount with the detachment from 1996 to 2015, according to Donnie Davis, the detachment’s stable master.
“That’s a rare horse,” said Davis. “Especially for the breed and to have done the kind of work that we do out here for that amount of time.”
Davis is a retired Soldier and former member of the division’s horse detachment. He’s also one of the few people still on Fort Hood who had the honor of riding Cambrai.
“I can remember riding that horse when I was new out here to the horse detachment in 2001 when I was Soldier.”
Having history with Cambrai made the decision about Cambrai’s health a bit more difficult, Davis said.
“If he’s living in a lot pain, and he’s got all these injuries, he’s probably better off to move on,” said Davis.
The mood at the ceremony was a very somber one, as can be expected with the special relationship that develops between horse and rider.
“You develop a love for the horse,” said Nance, “I call Reveille (his mount) ‘Bro’ all the time, and I mean, he’s my friend.”