“Garryowen” is an old Irish quick-step that can be traced back to the early 1860s. 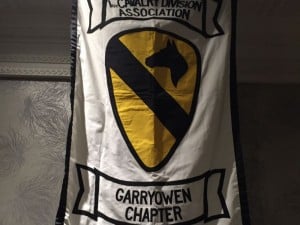 “Garryowen” is an old Irish quick-step that can be traced back to the early 1860s. The Regimental Song “Garryowen” came informally into the Army between 1861 and 1866 as a quickstep, but its use was first documented in 1867 when “Garryowen” was adopted by the 7th US Cavalry Regiment as the official Air (tune) of the Regiment, and the historical nickname given to the 7th Cavalry Regiment and Troopers. As it is generally portrayed, George Armstrong Custer did not, himself, bring the song to the regiment, but Brevet Lieutenant Colonel (Captain) Myles W. Keogh and several other officers with ties to the Fifth Royal Irish Lancers and the Papal Guard, two Irish regiments in the British Army, were believed to be instrumental in bringing the air to the regiment.

The geographical area that provided the inspiration and the name of one of the most popular, rollicking folk songs of Ireland is situated on the upward slope of a hill in Limerick County, near the City of Limerick. Local traditions and folk lore have preserved the historical significance of the area and the origin of its name “Garryowen”, a compounded word composed of two Irish words, which means “Garden of Owen”.

The terrain features of Garryowen gave the loyal patrons of the garden a broad, commanding view of the richly cultivated surrounding countryside, the old town of Limerick and the valley of the Shannon River which gently washes the battered, fortified towers of King John’s castle which was constructed in the late 1180’s to control traffic along the river. The cottage of Owen and surrounding plot of ground soon became a favorite holiday resort with the near-by citizens of Limerick because the atmosphere and accommodations were somewhat similar to those offered to the London mechanic by the Battersea tea-gardens.

A review of Irish literature reveals that “Owen’s garden was a general rendezvous for those who sought simple pleasure and amusement. The elderly drank together under the shade of trees and the young played at ball, goal, or other athletic activities on the green; while a few lingered in the near-by hedge-rows with their fair acquaintances. Owen’s garden was soon to became as famous for scenes of strife as it was for mirth and humor; and broken arms, legs and heads became a staple article of manufacture in the neighborhood.

“These new diversions were encouraged by a number of young people having a greater supply of animal spirits than wisdom to control themselves. The young gentlemen being fond of wit, amused themselves by having parties at night to wring the heads off all the geese, and tearing knockers off the doors in the neighborhood. They sometimes suffered their genius to soar as high as the breaking of a street lamp, and even resorting to the physical violence of a watchman. But, this type of joking was found a little too serious to be repeated very frequently, for few achievements of so daring a violence were documented in the records. They were obliged to content themselves with less ambitious distinction of destroying the door knockers and store-locks, annoying the peace of the neighborhood, with long continued assaults on the front doors, terrifying the quiet onlookers with every species of insult and provocation, and indulging their fratricidal propensities against all the geese in Garryowen.

“The fame of the ‘Garryowen Boys’ soon spread far and wide. Their deeds were celebrated by some inglorious minstrel of the day in that melody which has, since, resounded over the world; and even symbolically competed for national popularity with ‘St. Patrick’s Day’. A string of verses were appended to the tune which soon enjoyed equal notoriety. The name of Garryowen was as well known as that of the city of Limerick, itself, and Owen’s garden became almost a synonym for Ireland.”

“Garryowen” is known to have been used by Irish regiments as a drinking song. As the story goes, one of the Irish “melting pot” Troopers of the 7th Cavalry, under the influence of “spirits”, was singing the song. By chance Custer heard the melody, liked the cadence, and soon began to hum the tune himself. The tune has a lively beat, that accentuates the cadence of marching horses, and for that reason was adopted as the regimental song soon after Custer arrived at Ft. Riley, Kansas to take over command of the 7th Cavalry Regiment. It was the last song played for Custer’s men as they left General Terry’s column at the Powder River and rode into history.

Over its history, continuing the Regimental legacy, the 7th Cavalry Regiment has formed 3 Garryowen Bagpipe and drum bands.

1954 – The 7th Cavalry Regiment BagPipe & Drum Band organized by SSG Robert J. Scroggie at Camp Haugen, Japan. The Tartan had 7 colors: Dark Blue and Yellow of the US Cavalry; Light Blue to signify the present day infantry role in the cavalry; Red for action; and White for honor along with Green and Lavender.

1959 – The 2nd Reconnaissance Squadron, 7th Cavalry formed a BagPipe and Drum Band, under the guidance of LTC Roger Rawley and CPT John L. Lindgren. The original members were sent to a British regiment, the 1st Battalion Royal Inniskilling Fusiliers at Wuppertal, where they were given preliminary training by Irish pipers and drummers.

Today units of the 7th Cavalry still use Bagpipers. As they march and play, we think of all of those glorious memories of the past.

“Garryowen” has become undoubtedly the most famous of all the regimental marches in the Army. It became the Official Song of the 1st Cavalry Division in 1981. During “First Team” ceremonies, at Cooper Field, Fort Hood the song is not sung; however, it is customary for the song to be played at the conclusion of the ceremonial activities and the guests stand and clap.

In closing out of the Gulf War and returning home to the United States, in 1991, the 1st Cavalry Division the band joined in leading the whirlwind celebrations by parading down a dozen avenues of Atlanta, Houston, Dallas, Washington, DC and New York.

The visit to New York City was a tremendous welcome from the public, press and police. At Battery Park, the parade formation turned into Broadway, which became a wide “red” carpet for the Band to perform. There on Broadway, under a sunlit snowstorm of paper, the 1st Cavalry Division Band, lead by Bandmaster SFC Gary Flake, took the Big Apple by storm when they played the swaggering melody of the Division song, “Garryowen”.

Let Bacchus’s sons be not dismayed,
but join with me each jovial blade,
come booze and sing and lend your aid,
to help me with the chorus:

Instead of spa we’ll drink down ale
and pay the reckoning on the nail,
for debt no man shall go to jail
from Garry Owen in glory.

We are the boys who take delight
in smashing Limerick lamps at night,
and through the street like sportsters fight,
tearing all before us. (Chorus)

We’ll break windows, we’ll break doors,
the watch knock down by threes and fours,
then let the doctors work their cures,
and tinker up our bruises, (Chorus)

We’ll beat the bailiffs out of fun,
we’ll make the mayor and sheriffs run,
we are the boys no man dare dun,
if he regards a whole skin. (Chorus)

Our hearts so stout have got us fame,
for soon ’tis known from whence we came,
where’re we go they dread the name,
of Garry Owen in glory. (Chorus)

There was a special set of lyrics written for the 7th Cavalry Regiment in 1905. For those special Troopers of the 7th:

We are the pride of the Army
and a regiment of great renown,
Our name’s on the pages of history.
From sixty-six on down.
If you think we stop or falter
While into the fray we’re going
Just watch the steps with our heads erect,
While our band plays Garryowen. (Chorus)

In the Fighting Seventh’s the place for me,
Its the cream of all the Cavalry;
No other regiment ever can claim
Its pride, honor, glory and undying fame.

We know fear when stern duty
Calls us far away from home,
Our country’s flag shall safely o’er us wave,
No matter where we roam.
“Tis the gallant 7th Cavalry
It matters not where we are going”
Such you’ll surely say as we march away;
And our band plays Garryowen. (Chorus)

Then hurrah for our brave commanders!
Who led us into the fight.
We’ll do or die in our country’s cause,
And battle for the right.
And when the war is o’er,
And to our home we’re goin
Just watch your step, with our heads erect,
When our band plays Garryowen. (Chorus)

Reference: “From Custer to MacArthur, the 7th US Cavalry”