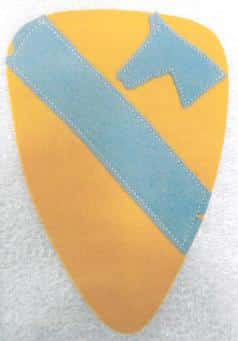 Original patch submitted by COL & Mrs. Dorcy which is at Carlisle Barracks.

“The big yellow patch does something to an individual that makes him a better Soldier, a better team member, and a better American than he otherwise would have been.”

– General Creighton Abrams, while commander of all U.S. Forces in Southeast Asia 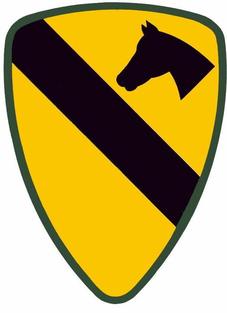 Description – On a yellow triangular Norman shield with rounded corners 5 1/4 inches (13.34 cm) in height overall, a black diagonal stripe extending over the shield from upper left to lower right and in the upper right a black horse’s head cut off diagonally at the neck all within a 1/8 inch (.32 cm) green border.

Symbolism – The color yellow, the traditional Cavalry color, and the horse’s head refer to the Division’s original Cavalry structure. Black, symbolic of iron, alludes to the transition to tanks and armor. The black diagonal stripe represents a sword baldric and is a mark of military honor; it also implies movement “up the field” and thus symbolizes aggressive élan and attack. The one diagonal bend, as well as the one horse’s head, also alludes to the Division’s numerical designation. 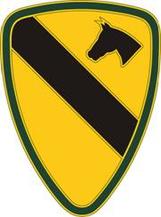 Description – A gold color metal and enamel device 2 inches (5.08 cm) in height consisting of a design similar to the shoulder sleeve insignia.

Description – A metal and enameled device 1 inch (2.54 cm) in height overall consisting of a gold colored Norman shield with a black horse’s head couped in sinister chief, and a black bend charged with two five-pointed stars.

The Institute of Heraldry
28 August 1974 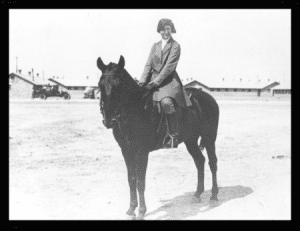 “The patch had to be large enough to be seen through the dust and sand at Fort Bliss and we made it that way because it is worn by big men who do big things.”

“Wearing the largest patch in the Army inventory also brings with it a responsibility to be the best.”

– General Peter Chiarelli at his change of command.

Shortly after the 1st Cavalry Division was authorized the War Department issued a directive asking for the submission of possible designs for the 1st Cavalry Division’s “shoulder sleeve” (shoulder patch). The regulations for the competition required (1) that the patch should have only two colors, (2) that it be an easily recognizable sign around which men could reassemble during or after battle, and (3) that it would bring men together in a common devotion.

The design chosen, a distinctive bright-yellow Norman knight’s shield with a diagonal stripe and the silhouette of a horse’s head, was submitted by Colonel and Mrs. Ben H. Dorcy. At the time, Colonel Dorcy was commander of the 7th Cavalry Regiment at Fort Bliss. His wife, Gladys Fitch Dorcy, later would be hailed as the “official mother” of the First Team.

The Dorcy’s held an unusual edge in the design competition. They were internationally recognized experts in heraldry, the study of the symbolisms and genealogy of coats of arms. But their duty station in El Paso also had something to do with their choice of symbols for the 1st Cavalry Division patch.

One afternoon in September 1921, after the patch competition had begun, the Dorcys enjoyed an especially beautiful sunset. Mrs. Dorcy was cutting up one of her husband’s old dress-blue capes. The cape’s liner was bright yellow; blue and yellow had long been the traditional colors of cavalry. At that moment, a Trooper rode past their house on a handsome, blue-black thoroughbred. The design of the patch quickly took shape in their minds after this conjunction of seemingly commonplace events.

Material from Colonel Dorcy’s cape liner became the yellow cloth for the first patch. The colonel drew a sketch of a Norman shield and a horse’s head on the cloth. Across the yellow field of the patch, his wife sewed a diagonal bend, symbolic of the scaling walls of enemy castles. The stripe – a “Ben Dexter” in heraldic terms – also represents a baldric, a belt worn over one shoulder in medieval times to support a sword or bugle. Swords and bugles, of course were two of the strongest symbols of cavalry.

Originally, the patch was yellow and blue. But black, symbolic of iron and armor, later replaced the blue and improved visibility. The patch also was the largest divisional patch approved in the United States Army. “The patch had to be large enough to be seen through the dust and sand at Fort Bliss,” Mrs. Dorcy later explained. “And we made it that way because it is worn by big men who do big things.”

The original patch designed by Colonel and Mrs. Dorcy was displayed at the U.S. Army Military History Library at the Army War College in Carlisle, Pennsylvania.

After her husband’s death in 1926, Mrs. Dorcy, who became known affectionately as “Mother Dorcy” by the 1st Cavalry Troopers, often lectured before civilian and military groups on the art of heraldry and how it had been instrumental in designing the First Team’s patch. In 1959, she was awarded a certificate of achievement by Major General George E. Bush, who then commanded the 1st Cavalry Division. The certificate named her the “mother” of the division and honored her dedicated interest in the 1st Cavalry since its inception.

Her activities on behalf of the First Team continued until she died May 24, 1974 at the age of 88 in Washington, DC.