History of the 1st Cavalry Division 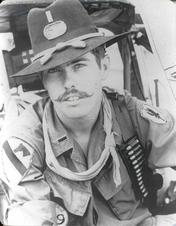 While Cavalry is not the oldest branch in the Army, it is a branch steeped in history, tradition and colorful tales of daring. The flash of a saber in the sunlight, the bugler sounding the charge, a red and white guidon flapping in the breeze and the thunder of horses hooves pounding the ground come to mind when one thinks of Cavalry. The tales of Cavalry Troopers told in books and movies and the brisk tune of Garry Owen remind us of the dust covered Troopers on horseback and the dashing officers with bold ideas and tactics that turned the tide of battle. In all of these things the Cav Trooper with his Cavalry Hat (Stetson) and Spurs stands out as the epitome of excellence. An heroic figure with ties to the history of our nation and a focus on the future greatness yet to come. 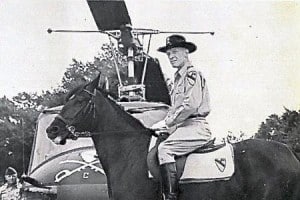 The tradition of the “Cav Hat” began in the early days before the Vietnam War. The 11th Air Assault Division cavalry scout pilots were looking to distinguish themselves from other troops when they adopted the Model 1876 campaign hat for wear. They felt a need to return to the traditions of the Cavalry so long forgotten. LTC John B. Stockton, commander of the 3rd Battalion, 17th Cavalry Regiment, is given credit for establishing the tradition of wearing the Cavalry Stetson, much to the chagrin of the Division command group. By the time the 11th Air Assault Division was redesignated the 1st Cavalry Division (Airmobile) the members of his unit, the 1st Squadron, 9th Cavalry Regiment, were wearing the hat.

LTC Stockton transferred the “Cav Hat” tradition to the 1st Cavalry Division in Vietnam. By the end of the Vietnam War, many air and ground units were wearing the hat. The tradition was continued after Vietnam and has become the standard for all cavalry units in the Army.

The Cav Hat is not an issued item and is not covered in any of the uniform regulations but it is worn by the Troopers of the 1st Cavalry Division and many other cavalry units for ceremonies and special cavalry events. The type and number of items worn on the “Cav Hat” vary greatly and demonstrate the individuality and style of the wearer. The 1st Cavalry Division has published a Memorandum of Instruction (MOI) that covers the wearing of the “Cav Hat” and spurs for those currently serving with the First Team but for Veterans the MOI is only a guideline of what right looks like. A link to the MOI is provided on this web page.

The “Cav Hat” is a standard black Cavalry hat, Stetson or other appropriate brand, with a 3 inch brim and a black leather chin strap. The chin strap is fastened to the hat cord and goes through the brim. The chin strap is worn behind the wearer’s head unless mounted. When mounted the chinstrap may be worn under the chin to maintain the hat’s position on your head and keep it from falling off. If your “Cav Hat” does not have a chin strap, it is just a black hat commonly referred to as a “cowboy hat”.

Hat cords are worn and represent the rank of the wearer. General officers wear solid gold cords, field and company grade officers wear black and gold hat cords, warrant officers wear black and silver hat cords and enlisted Troopers wear Cavalry yellow hat cords. The hat cords should be adjusted so that the acorn on the ends of the cord comes to the edge of the brim. Cords may be knotted if the wearer wishes. While many refer to the knots in the cords as “combat knots” there is no documentation available to support this idea. The Division MOI prohibits any other type of hat cords for those Troopers currently on active duty with the 1st Cavalry Division.

Normally the branch insignia of the Cavalry, crossed sabers, are worn on the front along with the rank of the wearer. The rank is worn above the branch insignia evenly spaced. Both are centered on the front of the hat. Regular sized Distinctive Unit Insignia (DUI), commonly referred to as unit crests, or miniatures of your unit are traditionally put on the back of the “Cav Hat”. Additional items like a CIB or CMB may also be placed on the “Cav Hat” along with reunion pins or other items if you are a Veteran. Some of the “Cav Hats” worn by our Veterans are festooned with numerous pins, miniature medals and other items. Active Duty Troopers assigned to the First Team must follow the guidelines of the MOI.

When Is a Cav Hat appropriate for wear?

The answer to that question is always – unless you are presently an active duty Trooper. Active duty Troopers are bound by uniform policies and wear of the “Cav Hat” is covered in the MOI. All former Cav Troopers may wear their “Cav Hat” at their own pleasure but are encouraged to wear them to all gatherings of Cavalry Veterans and unit reunions. The “Cav Hat” is always appropriate at patriotic observances like Veterans Day, Independence Day and Memorial Day. Of course, never wear your “Cav Hat” in circumstances that would bring discredit to the Cavalry or your unit.

Where can I purchase my Cav Hat?

Troopers may purchase a Cav Hat anywhere that sells them but we strongly recommend that you purchase your Cav Hat (Stetson) from the Crossed Sabers Chapter Souvenir Shop located in the 1st Cavalry Division Museum at Fort Hood, Texas. For those of you that live elsewhere, the Souvenir Shop has an on-line catalog and you can order your Stetson from them and have it shipped to your home. The Crossed Sabers Souvenir Shop sells the official Cav Stetson made by Stetson Hat Company in Garland, Texas. The Cav Stetson’s sold at the Souvenir Shop come with the chin strap but the hat cord and other accoutrements must be purchased separately.

The Order of the Spur

“The tradition of awarding spurs has its roots in knighthood, where the awarding of spurs symbolized entry into the ranks – and fraternity – of mounted warriors. Usually the squire aspiring to knighthood had to perform some task or deed on the battlefield or tournament field (tournaments were considered like our training maneuvers) to “win their spurs”. The spurs themselves where buckled on during the investiture to knighthood usually during a Mass or some other religious ceremony (Knighthood itself was considered sacramental, if not a sacrament itself). Thereafter, it was the spurs that symbolized that a man was a knight – not his sword, horse, or armor. No matter how financially destitute, a poor knight would part with everything else before his spurs. The primary act of degradation (removing someone from the knightly class) was to have another knight cut off the offending knight’s spurs. So much for the mists of time. It is not known when the ceremony for awarding spurs for outstanding performance started in the U.S. Cavalry.

“Once documented as having achieved the performance objectives, the candidate is designated to participate in the Spur Ride exercise. This exercise requires completion of numerous additional tasks.

“Upon successful accomplishment of the requirements the senior officer awards the spurs to be proudly worn throughout the Trooper’s Cavalry career.” Source -The cover liner of the book, 1st Cavalry Division – A Spur Ride Through the 20th Century, “From Horses to the Digital Battlefield”.

The same MOI that covers the “Cav Hat” covers the qualifications required for the present Troopers of the First Team to “earn their spurs” and also describes the spurs authorized for wear and how to wear them. Many Veterans of the First Team will have no remembrance of earning their spurs since most of the unit spur programs came into being after the Division arrived at Fort Hood. Those Troopers that rode horses in West Texas with the Division and rode horses earned their spurs learning to be a horse cavalry Trooper. Those Troopers that have been fortunate enough to serve in the Horse Cavalry Detachment have been earning the right to wear spurs for many years. 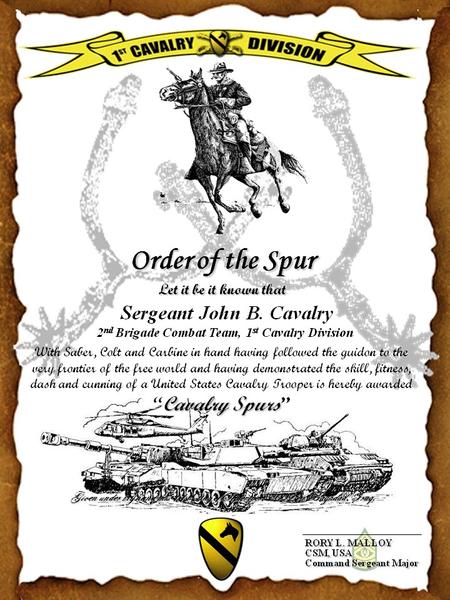 The Division’s MOI states, “The ‘Order of the Spur’ will not be awarded to any Trooper based on arbitrary or meritless criteria such as rank, time in service, branch, and ability to endure hazing or other degrading behavior. Rather, Troopers must be in good standing within their formation (i.e. have no incidents of misconduct, record of adverse actions, or failures in obtaining basic Army standards) and then ‘earn’ the right to wear Cavalry Spurs through their demonstrated proficiency at both technical and tactical skills expected of Troopers assigned to the Division.” Troopers may lose their right to wear spurs if they “fail to remain in good standing such as demonstrating an act of indiscipline.” The Troopers are awarded a certificate and are able to wear ‘Silver Spurs’ once they have completed the Spur Ride (test) and been approved.

The Gold Spurs, often referred to as “Combat Spurs” are awarded to Troopers during their combat deployments. It is encouraged that Troopers participate in a “Spur Ride”, earning the right to wear Spurs regardless of color. Brigades may modify the “Spur Ride” during their deployments based on available resources and time constraints, however, discipline is a must. Neither the Silver or Gold Spur are more prestigious than the other. The wearer may wear either color but the spurs being worn must match.

The Prince of Wales Spur, pictured above is the standard spur worn with either a black or tan strap. The 1859 Cavalry Spur, pictured below, is an alternate style of spur that may be worn.

When are Spurs appropriate for wear? 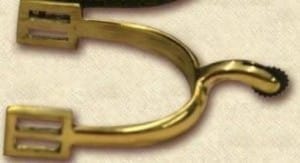 The answer to that question is whenever you are wearing a “Cav Hat” or riding a horse – unless you are presently an active duty Trooper. Active duty Troopers are bound by uniform policies and wear of the Spurs is covered in the Memorandum of Instruction. All former Cav Troopers may wear their Spurs at their own pleasure but are encouraged to wear them to all gatherings of Cavalry Veterans and unit reunions. The “Cav Hat” is always appropriate at patriotic observances like Veterans Day, Independence Day and Memorial Day. As with the “Cav Hat”, never wear your Spurs in circumstances that would bring discredit to the Cavalry or your unit.

Where can I purchase my Spurs?

Troopers may purchase Spurs anywhere that sells them but we strongly recommend that you purchase your Spurs from the Crossed Sabers Souvenir Shop located in the 1st Cavalry Division Museum at Fort Hood, Texas.

For those of you that live elsewhere, the Souvenir Shop has an on-line catalog and you can order your Spurs from them and have them shipped to your home. The Crossed Sabers Souvenir Shop sells the Prince of Wales Spur in both silver and gold color. Spurs come with black straps. Tan straps may be ordered separately.