The First Team in Bosnia

“Peacekeeping in the Balkans” 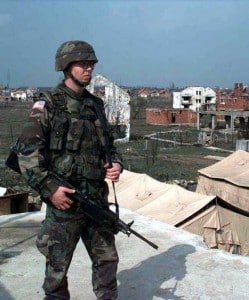 The 1st Cavalry Division’s mission was to conduct operations to enforce the military provisions set forth by the Dayton Accords. The First Team Soldiers served as our nation’s ambassadors. Their day-to-day presence and commitment to the citizens of this ravaged nation helped prove that a lasting and self-sustaining peace is possible.

In order to conduct successful peace missions while in theater, Soldiers were extensively trained on mine awareness, country and cultural customs and checkpoint and convoy operations at Fort Hood. Training was conducted on all levels including individual readiness training, leader/staff training, Operation Joint Forge Training and concluded with the Mission Rehearsal Exercise conducted at the Joint Readiness Training Center at Fort Polk, Louisiana.

1st Cavalry Division Troopers were placed in positions of responsibilitiy never before experienced. These responsibilities ranged from monitoring former warring factions to assisting in the return of displaced persons and refugees.

The preparation for the deployment included preparing Family members for the long separation. The 1st Cavalry Division’s Family and Soldiers’ readiness program set a new Army standard. The First Team set the conditions to build self-sufficiency in our Families.

The division expertly executed the SFOR 4 and 5 missions in Bosnia-Herzegovina and set new standards for follow on units. 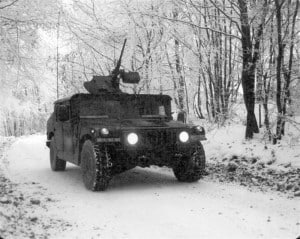 During the six months, squads and platoons conducted over 9,000 combat patrols and escorted over 1000 convoy movements over some of the most rugged terrain and austere conditions. The Soldiers conducted hundreds of weapons storage site inspections, established vehicle checkpoints designed to monitor and control movement and often conducted searches for and seizures of illegal contraband and weapons. The pilots, crew chiefs and mechanics set a new Army benchmark for safety and the number of hours flown–over 17,000 flying hours. The Engineers monitored the de-mining of more than 80,000 square meters of contested land and supervised the construction of 41 million dollars worth of base camp improvements.