PER SCINTILLAM FLAMMA
(Through The Spark, The Flame) 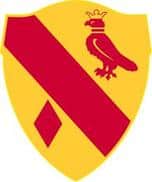 The 19th Artillery was constituted on June 3, 1916, in the Regular Army as the 19th Field Artillery. It was organized June 1, 1917, at Camp Wilson, Texas. On December 12, 1917, the regiment was assigned to the 5th Division (later 5th Infantry Division). The unit was inactivated on September 6, 1921, at Camp Bragg, North Carolina.

The battalion was redesignated on October 15, 1957, as the 2nd Howitzer Battalion, 19th Field Artillery, and activated and assigned to the 1st Cavalry Division in Korea (concurrently organic elements were constituted and activated). On September 1, 1963, the unit was redesignated 2nd Battalion, 19th Artillery. The battalion was transferred (less personnel and equipment) from Korea to Fort Benning, Georgia, on July 1, 1965, and reorganized as part of the 1st Cavalry Division (Airmobile). The unit was formed at Fort Benning from personnel and equipment of the 6th Battalion, 81st Field Artillery that was part of the 11th Air Assault Division (Test).

The 19th Artillery participated in the campaigns of St. Mihiel and Lorraine (1918) in World War I, and Normandy, Northern France, Rhineland, Ardennes-Alsace, and Central Europe in World War II.

Initially the battalion’s batteries were placed in the vicinity of the division’s Camp Radcliff base camp at An Khe and their first missions were harassment and interdiction fires and fires at suspected Viet Cong locations.

The 2-19th received a warning order in late October, 1965 to be prepared to move to the vicinity of Pleiku near the Cambodian border.  The battalion provided artillery fires during the Pleiku Campaign for which the 1st Cavalry Division was awarded the Presidential Unit Citation.  The battles at Pleiku provided the batteries of the battalion with valuable combat experience.  Lessons such as the importance of sling loading ammunition and equipment, rather than loading it internally, had been learned and would be put into effective use in the future.

In 1966, the battalion participated in Operations LINCOLN, CRAZY HORSE, NATHAN HALE, THAYER I and THAYER II.  In December 1966 while at LZ Bird, B Battery earned more honor for the battalion in heavy fighting involving small arms and “beehive” rounds.  Several of the Troopers were awarded decorations for valor and the Battery was awarded the Presidential Unit Citation along with other units at LZ Bird.

During 1967, the battalion continued to  support 1st Brigade operations throughout the II Corps area, primarily in the division’s longest action, Operation PERSHING which lasted almost a year.  This operation aimed at clearing the Bong Son Plains and the An Lao Valley near the Vietnamese coast of the enemy.  The battalion fired its 500,000th round in Vietnam in September, 1967.  Major battles fought by the 1st Brigade during 1967 included the first Battle of Tuy Au on 18-19 February, the first Battle of Tam Quan from 19 to 21 March, and the second Battle of Tam Quan from 6 to 20 December.

Early in 1968, the battalion continued the mission in the An Lao Valley and Bong Son Plain region but in late January the division moved to the I Corps Tactical Zone.  Between 18 and 31 January the battalion made eight moves, fired 1,470 missions and 27,812 rounds.

Throughout this period, the city of Quang Tri was threatened by five NVA regiments.  Three of the regiments tried to take the city in succession but the combination of 1st Brigade infantry and the battalion’s howitzers crushed their efforts.  In April and May the battalion provided artillery fire as the division’s elements entered the A Shau Valley which had long been an enemy sanctuary.

In October and November 1968, the division and the battalion left the northernmost provinces of Vietnam for the III Corps Tactical Zone and the mission of interdicting the enemy’s infiltration routes that led from Cambodia towards Saigon.  The battalion’s new home was Tay Ninh.

On March 21, 1969, C Battery was on LZ White when NVA sappers hit the base.  Using direct fire Charlie Battery fought off the attackers.  On May 6, the NVA hit LZ Carolyn where A Battery mowed down the enemy with 800 rounds of direct fire.  It was B Battery’s turn on May 12 when the enemy attacked LZ Jamie.  The enemy using Bangalore torpedoes to penetrate the perimeter wire.   The battalions batteries proved invaluable in other ground attacks in 1969, helping to stop enemy attempts to overrun LZ Becky and LZ Ike.

On March 29, 1970, a battalion of the 272nd NVA Regiment swarmed out of the trees and met stiff resistance from two companies of the 2nd Battalion, 7th Cavalry (A and C) and B Battery of the 2nd Battalion, 19th Field Artillery on FSB Jay.  The first rounds from the NVA barrage hit the antennae of the command post and FDC effectively cutting off communications.  The brigade and division command posts had no knowledge of the attack until the units at FSB Illingworth notified them about the glow of flares and flashes from explosives.

Two days later B Battery located at FSB Hannas fired in support of one of the most intense fights of the war on FSB Illingworth which included A and C Company, 2nd Battalion, 8th Cavalry, one quad .50 caliber gun truck from B 5-2 FA, three 155 howitzers from the 1-30th FA, two 8 inch self propelled howitzers and two 175 Howitzers from the 32nd Field Artillery and six howitzers from B 1-77th Field Artillery.   Since FSB Jay had been heavily attacked two days earlier the base commander scheduled alert exercises every two hours after midnight.  Ground Surveillance Radar would contact the 2-19th FA FDC whenever they had contact and they would fire prearranged fires.  At 0218 on 1 April a full frontal assault by a battalion of the 272nd NVA Regiment began after a barrage of mortars, rocket grenades, rocket fire and automatic weapons rained down on the fire base.  The defense at the fire base prevented penetration of the perimeter and the attack was over by 0500.  The successful defense was added by early warnings, prompt responses of an effective prearranged artillery fire plan and the bravery of the Troopers manning the FSB.

The battalion was awarded the Valorous Unit Award, along with the rest of the division, for the fighting in the Fish Hook region of Cambodia in May and June of 1970.

March 26, 1971 officially marked the end of duties for the 1st Cavalry Division in Vietnam with the exception of the 3rd Brigade.  The 2nd Battalion, 19th Field Artillery was inactivated at Fort Lewis, Washington on April 2, 1971 and remained inactive until it was reactivated at Fort Hood, Texas on April 24, 1974.  The battalion served with the 1st Cavalry Division Artillery at Fort Hood until its inactivation on March 30, 1979.

Lineage and Honors of the 2nd Battalion, 19th Field Artillery