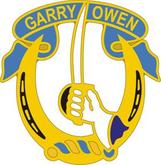 Within a Gold and enamel horseshoe 1 1/4 inches (3.18 cm) overall, showing seven nail holes, heels upward and the opening between the heels closed with a Blue ribbon bearing the words “GARRY OWEN” in Yellow letters, the crest of the coat of arms of the Regiment (on a wreath Or and Azure a dexter arm embowed vested Azure the hand in a buckskin gauntlet Proper grasping an old style United States Army saber Argent hilted Or).

The color gold, or yellow, is symbolic of the Cavalry service, yellow being the color of the facings on the old blue uniform at the time the Regiment was first organized. The horseshoe is adapted from the Regimental coat of arms, the seven nail holes alluding to the unit’s numerical designation. The gauntlet and saber at the “Charge” position are also adapted from the coat of arms and represent the “Cavalry Charge” and the battle heritage of the Regiment. “Gary Owen” is the name of a song which became a favorite of General Custer and once was used as a battle song in the Indian Wars.

Shield:   Or, on a chevron Azure, between a phoenix rising from its ashes in dexter chief, the head of a North American Indian in war bonnet couped at the neck in sinister chief, all Proper, and a yucca plant Vert in base, seven horseshoes heels upward of the field.

Crest:   On a wreath of the colors (Or and Azure) a dexter arm embowed vested Azure, the hand in a buckskin gauntlet Proper, grasping an old style United States Army saber Argent, hilted Or.

Shield:   The field is yellow, the Cavalry color; the principal charge is a chevron whose origin tradition ascribes to the spur, which was formerly of that shape without rowel.  The number of the horseshoes corresponds to the numerical designation of the regiment.  The phoenix symbolizes the resurgence of the regiment after its heavy losses in the Battle of Little Big Horn.  The Indian head and yucca commemorate Indian campaigns and the Punitive Expedition of 1916, respectively.

Crest:   The crest shows the position of “raised saber” taken at the command “Charge” prescribed by General Order 6, Adjutant General Office, 1873, the arm being habited in the uniform of the period.