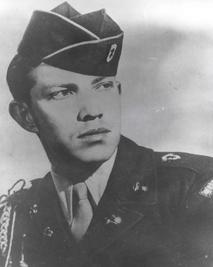 Citation: PFC Young distinguished himself by conspicuous gallantry and intrepidity above and beyond the call of duty in action. His company, spearheading a battalion drive deep in enemy territory, suddenly came under a devastating barrage of enemy mortar and automatic weapons crossfire which inflicted heavy casualties among his comrades and wounded him in the face and shoulder. Refusing to be evacuated, PFC Young remained in position and continued to fire at the enemy until wounded a second time. As he awaited first aid near the company command post the enemy attempted an enveloping movement. Disregarding medical treatment he took an exposed position and firing with deadly accuracy killed 5 of the enemy. During this action he was again hit by hostile fire which knocked him to the ground and destroyed his helmet. Later when supporting tanks moved forward, PFC Young, his wounds still unattended, directed tank fire which destroyed 3 enemy gun positions and enabled the company to advance. Wounded again by an enemy mortar burst, and while aiding several of his injured comrades, he demanded that all others be evacuated first. Throughout the course of this action the leadership and combative instinct displayed by PFC Young exerted a profound influence on the conduct of the company. His aggressive example affected the whole course of the action and was responsible for its success. PFC Young’s dauntless courage and intrepidity reflect the highest credit upon himself and uphold the esteemed traditions of the U.S. Army.

General Omar Bradley presented the Medal of Honor to CPL Young’s father in a ceremony at the Pentagon on 21 June 1951.  CPL Young was posthumously promoted and is buried in the Golden Gate National Cemetery in San Bruno, California.