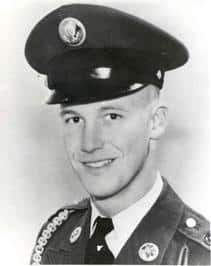 Citation: For conspicuous gallantry and intrepidity in action at the risk of his life above and beyond the call of duty. Early in the morning a reinforced North Vietnamese company attacked Company B, which was manning a defensive perimeter in Vietnam. The surprise onslaught wounded 5 members of a 6-man squad caught in the direct path of the enemy’s thrust. SSGT Stewart became a lone defender of vital terrain–virtually 1 man against a hostile platoon. Refusing to take advantage of a lull in the firing which would have permitted him to withdraw, SSGT Stewart elected to hold his ground to protect his fallen comrades and prevent an enemy penetration of the company perimeter. As the full force of the platoon-sized man attack struck his lone position, he fought like a man possessed; emptying magazine after magazine at the determined, on-charging enemy. The enemy drove almost to his position and hurled grenades, but SSGT Stewart decimated them by retrieving and throwing the grenades back. Exhausting his ammunition, he crawled under intense fire to his wounded team members and collected ammunition that they were unable to use. Far past the normal point of exhaustion, he held his position for 4 harrowing hours and through 3 assaults, annihilating the enemy as they approached and before they could get a foothold. As a result of his defense, the company position held until the arrival of a reinforcing platoon which counterattacked the enemy, now occupying foxholes to the left of SSGT Stewart’s position. After the counterattack, his body was found in a shallow enemy hole where he had advanced in order to add his fire to that of the counterattacking platoon. Eight enemy dead were found around his immediate position, with evidence that 15 others had been dragged away. The wounded whom he gave his life to protect, were recovered and evacuated. SSGT Stewart’s indomitable courage, in the face of overwhelming odds, stands as a tribute to himself and an inspiration to all men of his unit. His actions were in the highest traditions of the U.S. Army and the Armed Forces of his country.

Secretary of the Army Stanley R. Resor presented the Medal of Honor to SSG Stewart’s widow, Gertraud, in a Pentagon ceremony conducted on 24 August 1967.  He is buried in Riverview Cemetery in Middleport, Ohio.