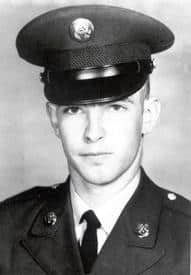 Place and date: Near Song Be, Republic of Vietnam, 14 September 1969

Citation: For conspicuous gallantry and intrepidity in action at the risk of his life above and beyond the call of duty. SGT Skidgel distinguished himself while serving as a reconnaissance section leader in Troop D. On a road near Song Be in Binh Long Province, SGT Skidgel and his section with other elements of his troop were acting as a convoy security and screening force when contact occurred with an estimated enemy battalion concealed in tall grass and in bunkers bordering the road. SGT Skidgel maneuvered off the road and began placing effective machinegun fire on the enemy automatic weapons and rocket-propelled grenade positions. After silencing at least 1 position, he ran with his machinegun across 60 meters of bullet-swept ground to another location from which he continued to rake the enemy positions. Running low on ammunition, he returned to his vehicle over the same terrain. Moments later he was alerted that the command element was receiving intense automatic weapons, rocket-propelled grenade and mortar fire. Although he knew the road was saturated with enemy fire, SGT Skidgel calmly mounted his vehicle and with his driver advanced toward the command group in an effort to draw the enemy fire onto himself. Despite the hostile fire concentrated on him, he succeeded in silencing several enemy positions with his machinegun. Moments later SGT Skidgel was knocked down onto the rear fender by the explosion of an enemy rocket-propelled grenade. Ignoring his extremely painful wounds, he staggered back to his feet and placed effective fire on several other enemy positions until he was mortally wounded by hostile small arms fire. His selfless actions enabled the command group to withdraw to a better position without casualties and inspired the rest of his fellow Soldiers to gain fire superiority and defeat the enemy. SGT Skidgel’s gallantry at the cost of his life were in keeping with the highest traditions of the military service and reflect great credit upon himself, his unit, and the U.S. Army. 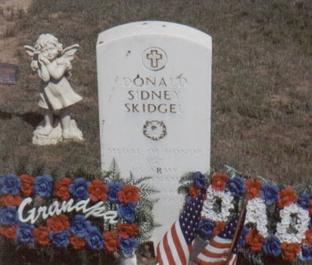 Vice President Spiro T. Agnew presented SGT Skidgel’s Family with his Medal of Honor in a ceremony conducted in the Old Executive Office Building in Washington, DC on 16 December 1971.  SGT Skidgel is buried in Sawyer Cemetery in Plymouth, Maine.