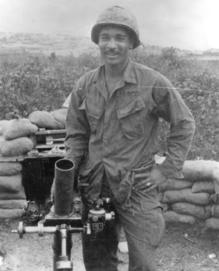 Citation: For conspicuous gallantry and intrepidity in action at the risk of his life above and beyond the call of duty. SPC4 Santiago-Colon distinguished himself at the cost of his life while serving as a gunner in the mortar platoon of Company B. While serving as a perimeter sentry, SPC4 Santiago-Colon heard distinct movement in the heavily wooded area to his front and flanks. Immediately he alerted his fellow sentries in the area to move to their foxholes and remain alert for any enemy probing forces. From the wooded area around his position heavy enemy automatic weapons and small-arms fire suddenly broke out, but extreme darkness rendered difficult the precise location and identification of the hostile force. Only the muzzle flashes from enemy weapons indicated their position. SPC4 Santiago-Colon and the other members of his position immediately began to repel the attackers, utilizing hand grenades, antipersonnel mines and small-arms fire. Due to the heavy volume of enemy fire and exploding grenades around them, a North Vietnamese Soldier was able to crawl, undetected, to their position. Suddenly, the enemy Soldier lobbed a hand grenade into SPC4 Santiago-Colon’s foxhole. Realizing that there was no time to throw the grenade out of his position, SPC4 Santiago-Colon retrieved the grenade, tucked it in to his stomach and, turning away from his comrades, absorbed the full impact of the blast. His heroic self-sacrifice saved the lives of those who occupied the foxhole with him, and provided them with the inspiration to continue fighting until they had forced the enemy to retreat from the perimeter. By his gallantry at the cost of his life and in the highest traditions of the military service, SPC4 Santiago-Colon has reflected great credit upon himself, his unit, and the U.S. Army. 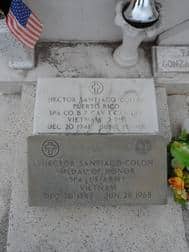 SP4 Santiago-Colón Medal of Honor was presented to his Family in a ceremony at the White House by President Nixon on 7 April 1970. He is buried in the city of Salinas, Puerto Rico.