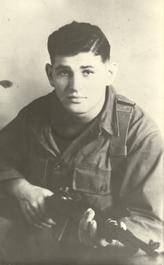 Citation:  For conspicuous gallantry and intrepidity at the risk of his life above and beyond the call of duty.  Corporal Tibor Rubin distinguished himself by extraordinary heroism during the period from July 23, 1950, to April 20, 1953, while serving as a rifleman with Company I, 8th Cavalry Regiment, 1st Cavalry Division in the Republic of Korea.  While his unit was retreating to the Pusan Perimeter, Corporal Rubin was assigned to stay behind to keep open the vital Taegu-Pusan Road link used by his withdrawing unit.  During the ensuing battle, overwhelming numbers of North Korean troops assaulted a hill defended solely by Corporal Rubin.  He inflicted a staggering number of casualties on the attacking force during his personal 24-hour battle, single-handedly slowing the enemy advance and allowing the 8th Cavalry Regiment to complete its withdrawal successfully.  Following the breakout from the Pusan Perimeter, the 8th Cavalry Regiment proceeded northward and advanced into North Korea.  During the advance, he helped capture several hundred North Korean Soldiers.  On October 30, 1950, Chinese forces attacked his unit at Unsan, North Korea, during a massive nighttime assault.  That night and throughout the next day, he manned a .30 caliber machine gun at the south end of the unit’s line after three previous gunners became casualties.  He continued to man his machine gun until his ammunition was exhausted.  His determined stand slowed the pace of the enemy advance in his sector, permitting the remnants of his unit to retreat southward.  As the battle raged, Corporal Rubin was severely wounded and captured by the Chinese.  Choosing to remain in the prison camp despite offers from Chinese to return him to his native Hungary, Corporal Rubin disregarded his own personal safety and immediately began sneaking out of the camp at night in search of food for his comrades.  Breaking into enemy storehouses and gardens, he risked certain torture or death if caught.  Corporal Rubin provided not only food to the starving Soldiers, but also desperately needed medical care and moral support for the sick and wounded of the POW camp.  His brave, selfless efforts were directly attributed to saving the lives of as many as forty of his fellow prisoners.  Corporal Rubin’s gallant actions in close contact with the enemy and unyielding courage and bravery while a prisoner of war are in the highest traditions of military service and reflect great credit on himself and the United States Army.

CPL Tibor Rubin was awarded the Medal of Honor by President George W. Bush on 23 September 2005 in a ceremony conducted at the White House.  A Hungarian-born Holocaust survivor, Rubin emigrated to the United States in 1948 and was a resident of Garden Grove, California.  CPL Rubin died on 5 December 2015 and is buried in Mount Sinai Memorial Park in Los Angeles, California.