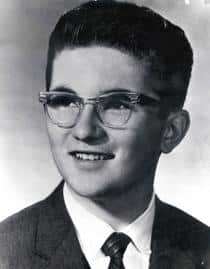 Citation: For conspicuous gallantry and intrepidity in action at the risk of his life above and beyond the call of duty. His platoon was deployed in a night ambush when the position was suddenly subjected to an intense and accurate grenade attack, and 1 foxhole was hit immediately. Responding without hesitation to the calls for help from the wounded men PFC Monroe moved forward through heavy small-arms fire to the foxhole but found that all of the men had expired. He turned immediately and crawled back through the deadly hail of fire toward other calls for aid. He moved to the platoon sergeant’s position where he found the radio operator bleeding profusely from fragmentation and bullet wounds. Ignoring the continuing enemy attack, PFC Monroe began treating the wounded man when he saw a live grenade fall directly in front of the position. He shouted a warning to all those nearby, pushed the wounded radio operator and the platoon sergeant to one side, and lunged forward to smother the grenade’s blast with his body. Through his valorous actions, performed in a flash of inspired selflessness, PFC Monroe saved the lives of 2 of his comrades and prevented the probable injury of several others. His gallantry and intrepidity were in the highest traditions of the U.S. Army, and reflect great credit upon himself and the Armed Forces of his country. 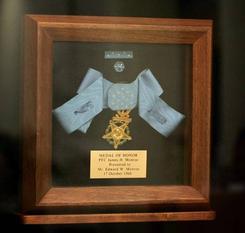 PFC Monroe is buried on Wheaton Cemetery in Wheaton, Illinois.  His Family was formally presented with his Medal of Honor during a ceremony at the Pentagon on what would have been his twenty-fourth birthday, October 17, 1968.  Monroe Middle School in Wheaton is named in his honor, and his medal is on display at the school.