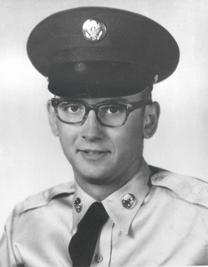 Citation: For conspicuous gallantry and intrepidity in action at the risk of his life above and beyond the call of duty. Serving as a medical aidman with Company B, SPC5 McWethy accompanied his platoon to the site of a downed helicopter. Shortly after the platoon established a defensive perimeter around the aircraft, a large enemy force attacked the position from 3 sides with a heavy volume of automatic weapons fire and grenades. The platoon leader and his radio operator were wounded almost immediately, and SPC5 McWethy rushed across the fire-swept area to their assistance. Although he could not help the mortally wounded radio operator, SPC5 McWethy’s timely first aid enabled the platoon leader to retain command during this critical period. Hearing a call for aid, SPC5 McWethy started across the open toward the injured men, but was wounded in the head and knocked to the ground. He regained his feet and continued on but was hit again, this time in the leg. Struggling onward despite his wounds, he gained the side of his comrades and treated their injuries. Observing another fallen rifleman Lying in an exposed position raked by enemy fire, SPC5 McWethy moved toward him without hesitation. Although the enemy fire wounded him a third time, SPC5 McWethy reached his fallen companion. Though weakened and in extreme pain, SPC5 McWethy gave the wounded man artificial respiration but suffered a fourth and fatal wound. Through his indomitable courage, complete disregard for his safety, and demonstrated concern for his fellow Soldiers, SPC5 McWethy inspired the members of his platoon and contributed in great measure to their successful defense of the position and the ultimate rout of the enemy force. SPC5 McWethy’s profound sense of duty, bravery, and his willingness to accept extraordinary risks in order to help the men of his unit are characteristic of the highest traditions of the military service and reflect great credit upon himself and the U.S. Army. 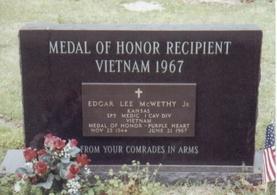 SP5 McWethy’s Medal of Honor was presented to his Family by President Richard M. Nixon on 16 October 1969.  He is buried in Baxter Springs, Kansas.