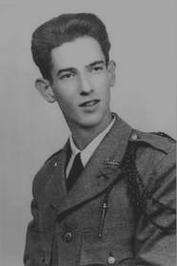 Citation: 1LT McGovern, a member of Company A, distinguished himself by conspicuous gallantry and intrepidity at the risk of life above and beyond the call of duty in action against an armed enemy of the United Nations. As 1LT McGovern led his platoon up a slope to engage hostile troops emplaced in bunker-type pillboxes with connecting trenches, the unit came under heavy machine gun and rifle fire from the crest of the hill, approximately 75 yards distant. Despite a wound sustained in this initial burst of withering fire, 1LT McGovern, assured the men of his ability to continue on and urged them forward. Forging up the rocky incline, he fearlessly led the platoon to within several yards of its objective when the ruthless foe threw and rolled a vicious barrage of hand grenades on the group and halted the advance. Enemy fire increased in volume and intensity and 1LT McGovern realizing that casualties were rapidly increasing and the morale of his men badly shaken, hurled back several grenades before they exploded. Then, disregarding his painful wound and weakened condition he charged a machine gun emplacement which was raking his position with flanking fire. When he was within 10 yards of the position a burst of fire ripped the carbine from his hands, but, undaunted, he continued his lone-man assault and, firing his pistol and throwing grenades, killed 7 hostile Soldiers before falling mortally wounded in front of the gun he had silenced. 1LT McGovern’s incredible display of valor imbued his men with indomitable resolution to avenge his death. Fixing bayonets and throwing grenades, they charged with such ferocity that hostile positions were overrun and the enemy routed from the hill. The inspirational leadership, unflinching courage, and intrepid actions of 1LT McGovern reflected utmost glory on himself and the honored tradition of the military services. 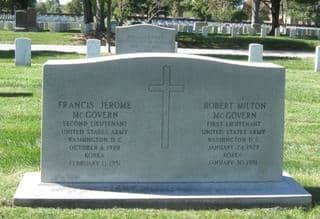 When his Medal of Honor was announced in January 1952, 1LT McGovern’s father, J. Halsey McGovern, refused to accept the award. He also refused to accept the Silver Star posthumously awarded his second son, Francis Jerome, a member of the 187th Airborne Regiment who was killed-in-action on 10 February 1951. The senior McGovern’s refusal was based on his belief that medals were superfluous.  He felt that they did not do justice to all of the heroes of the war in Korea.  And, as he told reporters, he did not feel that Truman “was fit to confer medals on anyone’s sons.”  1LT McGovern is buried in Arlington National Cemetery next to his brother.