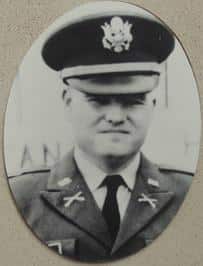 Citation: For conspicuous gallantry and intrepidity in action at the risk of his life above and beyond the call of duty. 2LT Leisy, Infantry, Company B, distinguished himself while serving as platoon leader during a reconnaissance mission. One of his patrols became heavily engaged by fire from a numerically superior enemy force located in a well-entrenched bunker complex. As 2LT Leisy deployed the remainder of his platoon to rescue the beleaguered patrol, the platoon also came under intense enemy fire from the front and both flanks. In complete disregard for his safety, 2LT Leisy moved from position to position deploying his men to effectively engage the enemy. Accompanied by his radio operator he moved to the front and spotted an enemy sniper in a tree in the act of firing a rocket-propelled grenade at them. Realizing there was neither time to escape the grenade nor shout a warning, 2LT Leisy unhesitatingly, and with full knowledge of the consequences, shielded the radio operator with his body and absorbed the full impact of the explosion. This valorous act saved the life of the radio operator and protected other men of his platoon who were nearby from serious injury. Despite his mortal wounds, 2LT Leisy calmly and confidently continued to direct the platoon’s fire. When medical aid arrived, 2LT Leisy valiantly refused attention until the other seriously wounded were treated. His display of extraordinary courage and exemplary devotion to duty provided the inspiration and leadership that enabled his platoon to successfully withdraw without further casualties. 2LT Leisy’s gallantry at the cost of his life are in keeping with the highest traditions of the military service and reflect great credit on him, his unit, and the U.S. Army. 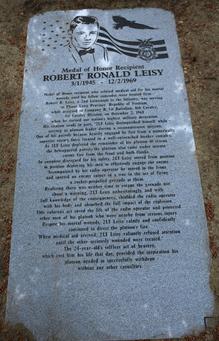