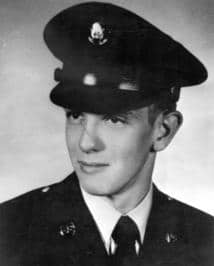 Citation: For conspicuous gallantry and intrepidity in action at the risk of his life above and beyond the call of duty. PFC Lauffer’s squad, a part of Company C, was suddenly struck at close range by an intense machine gun crossfire from 2 concealed bunkers astride the squad’s route. PFC Lauffer, the second man in the column, saw the lead man fall and noted that the remainder of the squad was unable to move. Two comrades, previously wounded and being carried on litters, were Lying helpless in the beaten zone of the enemy fire. Reacting instinctively, PFC Lauffer quickly engaged both bunkers with fire from his rifle, but when the other squad members attempted to maneuver under his covering fire, the enemy fusillade increased in volume and thwarted every attempt to move. Seeing this and his wounded comrades helpless in the open, PFC Lauffer rose to his feet and charged the enemy machine gun positions, firing his weapon and drawing the enemy’s attention. Keeping the enemy confused and off balance, his 1-man assault provided the crucial moments for the wounded point man to crawl to a covered position, the squad to move the exposed litter patients to safety, and his comrades to gain more advantageous positions. PFC Lauffer was fatally wounded during his selfless act of courage and devotion to his fellow Soldiers. His gallantry at the cost of his life served as an inspiration to his comrades and saved the lives of an untold number of his companions. His actions are in keeping with the highest traditions of military service and reflect great credit upon himself, his unit, and the U.S. Army. 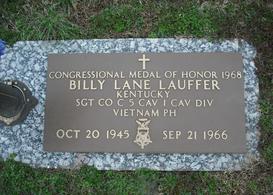 SGT Lauffer’s parents, Mr. ,and Mrs. Howard W. Lauffer,  were presented his Medal of Honor in a Pentagon ceremony conducted by Secretary of the Army Stanly R. Resor on 15 August 1968.  SGT Billy L. Lauffer was posthumously promoted and is buried in Murray, Kentucky.