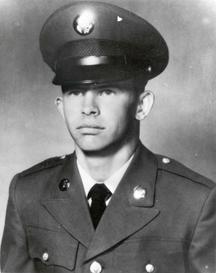 Citation: For conspicuous gallantry and intrepidity in action at the risk of his life above and beyond the call of duty. Sp4c. Johnston distinguished himself while serving as a mortarman with Company D, at a fire support base in Tay Ninh Province. SPC4 Johnston’s company was in defensive positions when it came under a devastating rocket and mortar attack. Under cover of the bombardment, enemy sappers broke through the defensive perimeter and began hurling explosive charges into the main defensive bunkers. SPC4 Johnston and 6 of his comrades had moved from their exposed positions to 1 of the bunkers to continue their fight against the enemy attackers. As they were firing from the bunker, an enemy Soldier threw 3 explosive charges into their position. Sensing the danger to his comrades, SPC4 Johnston, with complete disregard for his safety, hurled himself onto the explosive charges, smothering the detonations with his body and shielding his fellow Soldiers from the blast. His heroic action saved the lives of 6 of his comrades. SPC4 Johnston’s concern for his fellow men at the cost of his life were in the highest traditions of the military service and reflect great credit upon himself, his unit, and the U.S. Army. 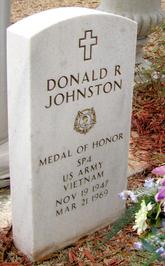 President Richard Nixon presented the Medal of Honor to his parents in a White House ceremony on 16 February 1971.  SP4 Johnston is buried at the Fort Benning Post Cemetery in Georgia.