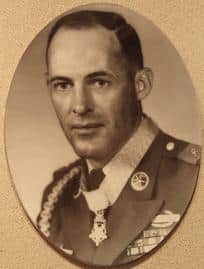 Citation: For conspicuous gallantry and intrepidity at the risk of life above and beyond the call of duty. Part of Company C was defending an artillery position when attacked by a North Vietnamese Army regiment supported by mortar, recoilless-rifle, and machine gun fire. At the outset, SSG Jennings sprang to his bunker, astride the main attack route, and slowed the on-coming enemy wave with highly effective machine gun fire. Despite a tenacious defense in which he killed at least 12 of the enemy, his squad was forced to the rear. After covering the withdrawal of the squad, he rejoined his men, destroyed an enemy demolition crew about to blow up a nearby howitzer, and killed 3 enemy Soldiers at his initial bunker position. Ordering his men back into a secondary position, he again covered their withdrawal, killing 1 enemy with the butt of his weapon. Observing that some of the defenders were unaware of an enemy force in their rear, he raced through a fire-swept area to warn the men, turn their fire on the enemy, and lead them into the secondary perimeter. Assisting in the defense of the new position, he aided the air-landing of reinforcements by throwing white phosphorous grenades on the landing zone despite dangerously silhouetting himself with the light. After helping to repulse the final enemy assaults, he led a group of volunteers well beyond friendly lines to an area where 8 seriously wounded men lay. Braving enemy sniper fire and ignoring the presence of booby traps in the area, they recovered the 8 men who would have probably perished without early medical treatment. SSG Jenning’s extraordinary heroism and inspirational leadership saved the lives of many of his comrades and contributed greatly to the defeat of a superior enemy force. His actions stand with the highest traditions of the military profession and reflect great credit upon himself, his unit, and the United States of America. 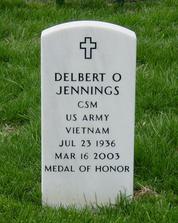 His Medal was awarded to him at the White House by President Lyndon B. Johnson on 19 September 1968.  CSM (Ret) Delbert O. Jennings retired as the Command Sergeant Major of the 1st Cavalry Division.  CSM (Ret) Jennings died on 16 March 2003 and was originally buried in the “Punchbowl” in Hawaii, he was re-interred in Arlington National Cemetery.