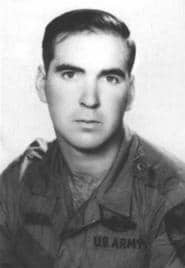 Citation: For conspicuous gallantry and intrepidity in action at the risk of his life above and beyond the call of duty. SPC4 Ingalls, a member of Company A, accompanied his squad on a night ambush mission. Shortly after the ambush was established, an enemy Soldier entered the killing zone and was shot when he tried to evade capture. Other enemy Soldiers were expected to enter the area, and the ambush was maintained in the same location. Two quiet hours passed without incident, then suddenly a hand grenade was thrown from the nearby dense undergrowth into the center of the squad’s position. The grenade did not explode, but shortly thereafter a second grenade landed directly between SPC4 Ingalls and a nearby comrade. Although he could have jumped to a safe position, SPC4 Ingalls, in a spontaneous act of great courage, threw himself on the grenade and absorbed its full blast. The explosion mortally wounded SPC4 Ingalls, but his heroic action saved the lives of the remaining members of his squad. His gallantry and selfless devotion to his comrades are in keeping with the highest traditions of the military service and reflects great credit upon SPC4 Ingalls, his unit, and the U.S. Army. 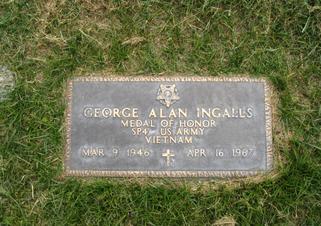 SP4 Ingall’s mother, Mrs. Maud M. Ingalls, received the Medal of Honor on her son’s behalf from Secretary of the Army Stanley R. Resor in a ceremony conducted at the Pentagon on 30 January 1969.  SP4 Ingalls is buried in Pierce Brothers Crestlawn Memorial Park in Riverside, California.