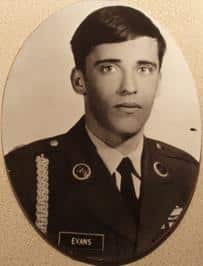 Citation: For conspicuous gallantry and intrepidity in action at the risk of his life above and beyond the call of duty. SGT Evans distinguished himself by extraordinary heroism while serving as a squad leader in a reconnaissance sweep through heavy vegetation to reconnoiter a strong enemy position. As the force approached a well-defined trail, the platoon scout warned that the trail was booby-trapped. SGT Evans led his squad on a route parallel to the trail. The force had started to move forward when a nearby squad was hit by the blast of a concealed mine. Looking to his right SGT Evans saw a second enemy device. With complete disregard for his safety he shouted a warning to his men, dived to the ground and crawled toward the mine. Just as he reached it an enemy Soldier detonated the explosive and SGT Evans absorbed the full impact with his body. His gallant and selfless action saved his comrades from probable death or injury and served as an inspiration to his entire unit. SGT Evans’ gallantry in action at the cost of his life were in keeping with the highest traditions of the military service and reflect great credit upon himself, his unit, and the U.S. Army. 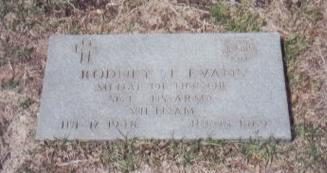 President Nixon presented SGT Evans Medal of Honor to his Family on 22 April 1971 in a White House ceremony.  SGT Rodney Evans died one day after his twenty-first birthday and is buried in Liberty Hill Cemetery in Florala, Alabama.