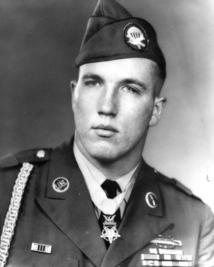 Citation: For conspicuous gallantry and intrepidity at the risk of life above and beyond the call of duty, when his platoon, while advancing tactically, suddenly came under intense fire from the enemy located on a ridge immediately to the front. Six members of the platoon were killed instantly and a number were wounded, including the platoon leader. SGT Dolby’s every move brought fire from the enemy. However, aware that the platoon leader was critically wounded, and that the platoon was in a precarious situation, SGT Dolby moved the wounded men to safety and deployed the remainder of the platoon to engage the enemy. Subsequently, his dying platoon leader ordered SGT Dolby to withdraw the forward elements to rejoin the platoon. Despite the continuing intense enemy fire and with utter disregard for his own safety, SGT Dolby positioned able-bodied men to cover the withdrawal of the forward elements, assisted the wounded to the new position, and he, alone, attacked enemy positions until his ammunition was expended. Replenishing his ammunition, he returned to the area of most intense action, single-handedly killed 3 enemy machine gunners and neutralized the enemy fire, thus enabling friendly elements on the flank to advance on the enemy redoubt. He defied the enemy fire to personally carry a seriously wounded Soldier to safety where he could be treated and, returning to the forward area, he crawled through withering fire to within 50 meters of the enemy bunkers and threw smoke grenades to mark them for air strikes. Although repeatedly under fire at close range from enemy snipers and automatic weapons, SGT Dolby directed artillery fire on the enemy and succeeded in silencing several enemy weapons. He remained in his exposed location until his comrades had displaced to more secure positions. His actions of unsurpassed valor during 4 hours of intense combat were a source of inspiration to his entire company, contributed significantly to the success of the overall assault on the enemy position, and were directly responsible for saving the lives of a number of his fellow Soldiers. SGT Dolby’s heroism was in the highest tradition of the U.S. Army. 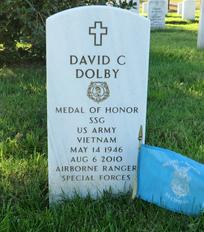 President Lyndon B. Johnson presented SGT David C. Dolby the Medal of Honor on 28 September 1967 in the East Room of the White House.  SGT Dolby died on 6 August 2010 and is buried in Arlington National Cemetery.