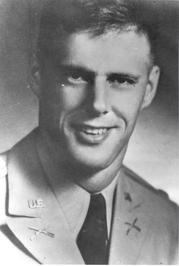 Citation: 1LT Coursen distinguished himself by conspicuous gallantry and intrepidity above and beyond the call of duty in action. While Company C was attacking Hill 174 under heavy enemy small-arms fire, his platoon received enemy fire from close range. The platoon returned the fire and continued to advance. During this phase one of his men moved into a well-camouflaged emplacement, which was thought to be unoccupied, and was wounded by the enemy who were hidden within the emplacement. Seeing the Soldier in difficulty he rushed to the man’s aid and, without regard for his personal safety, engaged the enemy in hand-to-hand combat in an effort to protect his wounded comrade until he himself was killed. When his body was recovered after the battle 7 enemy dead were found in the emplacement. As the result of 1LT Coursen’s violent struggle several of the enemies’ heads had been crushed with his rifle. His aggressive and intrepid actions saved the life of the wounded man, eliminated the main position of the enemy roadblock, and greatly inspired the men in his command. 1LT Coursen’s extraordinary heroism and intrepidity reflect the highest credit on himself and are in keeping with the honored traditions of the military service. 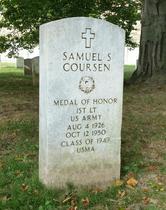