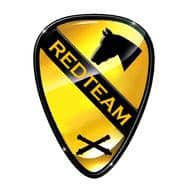 At the conclusion of World War II the Division Artillery performed occupation duty in Japan and girded itself for its next call to combat.

It was not long before the DIVARTY became involved in the Korean War. During the first few weeks, the artillerymen of the Division found themselves fighting with small arms alongside their artillery pieces. The cannoneers of the 1st Cavalry Division Artillery continued to do their share in the fighting in Korea during 1950 – 1951. Defending the Pusan Perimeter and then breaking out and moving past the 38th Parallel to Unsan. They fought valiantly against the Red Chinese who entered the war in November 1950 and continued to fight until the Division was ordered back to Japan in late 1951.

In 1957 the 1st Cavalry Division Artillery returned to Korea providing artillery support to the Division who was monitoring the DMZ.

In 1991, the Red Team helped pave the way for the1st Cavalry Division’s charge into Iraq, while showering the enemy with over 9,000 cannon round and MLRS rockets. The artillery’s lethal effects directly contributed to the success of the theater’s deception plan. DIVARTY units were the first United States Army artillery units to fire cannon and copperhead rounds as well as MLRS rockets in combat during Operation Desert Storm.

Following the major encounters of the Gulf War, the 1st Cavalry Division Artillery deployed in support of the peacekeeping mission in Bosnia-Herzegovina in support of Operation Joint Forge.

In 2004, the Red Team formed the nucleus of the 5th Brigade Combat Team (Provisional) and deployed to Baghdad, Iraq, where it conducted full spectrum operations in the Al Rasid District until March 2005 in support of Operation Iraqi Freedom II. Several field artillery battalions served as motorized task forces with only limited artillery serving in the their traditional role. The Red Team’s deployment culminated with the highly successful Iraqi National Election of January 2005.

On 26 May 2005, following the return from its Iraqi Freedom II deployment, the 5th Brigade (Provisional), formally the Division Artillery, 1st Cavalry Division was inactivated at Fort Hood, Texas. Subsequently, on 30 May 2005, the DIVARTY, 1st Cavalry Division, which had returned to its traditional role, was inactivated as part of the U.S. Army’s transformation towards a modular force.

After a nearly ten year period of inactivation, Headquarters and Headquarters Battery, 1st Cavalry Division Artillery was activated in a ceremony conducted at Fort Hood, Texas on 2 April 2015. Troopers of the Red Team continue to train and prepare to meet the needs of our country to fight and win anywhere in the world.

Reorganized as a Triangular Division on 25 March 1949; designation as Headquarters and Headquarters Battery, 1st Cavalry Division remained the same.