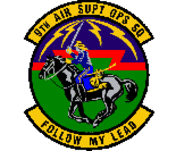 The onset of the 9th Air Support Operations Squadron’s history may be found in the origin of the 3rd Air Support Operations Group (ASOG) that evolved from the 602nd Tactical Air Control Wing (TAIRCW) which was organized on 1 March 1966 at James Connally AFB, Waco, Texas. It marked a new mission within the Tactical Air Command that placed emphasis on ground radar control and air support of ground forces. The unit participated in many major exercises during the 1970s to test and formulate USAF doctrine for the Tactical Air Control System (TACS).

The group’s mission was to integrate aerospace power on the battlefield with the fire and maneuvering ability of the Army. The group advised many Army commanders and staffs of Air Force aerospace power employment, provided tactical air control parties for control of close air support (CAS) assets, and also provided staff weather support for the Corps.

The ASOG began life at Fort Hood as an operating location of the 602nd Tactical Air Control Wing (TAIRCW) in the early 1970s. It was designated Detachment 1, 602nd TAIRCW on 1 October 1977. The detachment grew rapidly in proportion to ever increasing taskings.

With the reorganization of the Air Force, all Tactical Air Control Parties (TACPs) associated with combat maneuver units of III Corps were realigned under one headquarters. Previously the TACPs aligned with one inactivated. To support III Corps, the HQ 3d Air Support Group(ASG) was activated as part of the 355th Wing at Davis-Monthan AFB, Arizona, using elements from what had been Detachment 1, 602nd Air Control Wing (ACW). This put all elements of the Tactical Air Control System supporting III Corps under one commander.

At that time, the 3rd ASOG was composed of nearly 500 Air Force people who were in direct support of the US Army in several different ways. Units in the 3rd ASOG included the newly assigned 9th as well as the 10th, 11th, 13th, and 712th Air Support Operations Squadrons, and the 3rd Weather Squadron. The 3rd ASOG provided tactical air support for the III Mobile Armored Corps (Army) which included the 1st Cavalry Division, the 4th Infantry Division and geographically separated units, such as the 3rd Brigade of the 4th Infantry Division, and the 10th Special Forces Group (Airborne), at Fort Carson, Colorado, and the 1st Infantry Division and 3rd Armored Cavalry Regiment at Fort Riley, Kansas. The 3rd ASOG also provided weather support to III Corps, at home and in the field.

The mission of the 9th Air Support Operations Squadron is to advise and assist 1st Cavalry Division and subordinate Commands to integrate Airpower capabilities, and control Airpower assets in order to effectively accomplish their missions. Present TACP to Combatant Commanders’ to meet wartime needs. Be ready to execute Warplan taskings.

The mission statement (above) is expanded into a much more detailed set of objectives:

The 9th Air Support Operations Squadron (9 ASOS) will train, man, and equip Airmen, and be prepared to present mission ready forces to an air component commander, or task force commander, in support of world-wide contingency operations. These forces will be capable of sustaining full-spectrum operations as an autonomous expeditionary air support operations squadron and/or modular Tactical Air Control Teams responsible for integrating, planning, and directing execution of joint and coalition air-and space-power in support of the designated ground commander’s scheme of maneuver.

The 9 ASOS will maintain core Air Force squadron functionality in garrison or deployed to address personnel, logistics, and vehicle/radio maintenance related issues of assigned and attached forces. To this objective the 9 ASOS will continue to its habitual relationship with the 1st Cavalry Division.

The 9 ASOS will advise the Commanding General and senior staff of the 1st Cavalry Division on air and space power doctrine, as well as the full-spectrum of capabilities resident in the air component, while simultaneously integrating, planning, and directing execution of joint/coalition air-and space-power in support of the joint/coalition campaign plan.

1 July 1994; Activated at Fort Hood, Texas and assigned to the 1st Cavalry Division

​(Information compiled and written by William H. Boudreau with edits and additions by Dennis Webster)