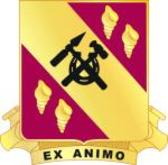 The roots of the 27th Support Battalion can be traced back to 1 September 1921 when its predecessor, the 27th Ordnance Company which was constituted in the Regular Army of the United States and assigned to the 1st Cavalry Division. On 20 September 1921, the unit was organized and activated as an ordnance company at Fort Bliss, Texas. The 27th began its service with the 1st Cavalry Division on border patrol providing farrier and blacksmith support for the horses and equipment of the division.

The 27th Ordnance supported the 1st Cavalry Division in numerous field training exercises in West Texas and during the Louisiana Maneuvers conducted in preparation for future wars.

In February 1943, the entire 1st Cavalry Division was alerted for an overseas assignment as a dismounted unit. On 2 March 1943, the 27th Ordnance Company was redesignated as the 27th Ordnance Medium Maintenance Company. Soon afterward, the unit, along with the 1st Cavalry Division was dismounted in 1943 and they were processed for movement to the Southwest Pacific as foot Soldiers. On 26 July, the Division arrived at Brisbane and began a fifteen mile trip to their new temporary home, Camp Strathpine, Queensland, Australia. The division received six months of intense combat jungle warfare training at Camp Strathpine in the wilds of scenic Queensland and amphibious training at nearby Moreton Bay.

After six months of intense combat jungle warfare training in Camp Strathpine, Australia, the 1st Cavalry Division sailed for the Admiralty Islands. It was time for the 1st Cavalry Division to receive their first baptism of fire. In the battles that followed in New Guinea, Bismarck, Leyte and Luzon, the 27th established a reputation of professionalism in performing its duties.

At 8:00 on 8 September, a history making convey left Hara-Machida with Tokyo as their destination. Headed by Major General William C. Chase, commanding general of the 1st Cavalry Division, the party included a Veteran from each troop of the Division. Passing through Hachioji, Fuchu and Chofu, the Cavalry halted briefly at the Tokyo City Limits. The first mission of the Division was to assume control of the city. On 16 September, the 1st Cavalry Division was given responsibility for occupying the entire city of Tokyo and the adjacent parts of Tokyo and Saitama Prefectures. The 27th Ordnance Medium Maintenance Company garrison assignment was at Camp Drake near Tokyo.

1946 was welcomed as a new dawning of peace for the 1st Cavalry Division. The days of privation, hardship, suffering and death were over for the first time since 7 December 1941. The following years of the occupation found the 1st Cavalry Division in control of Tokyo and vicinity, the capital of the war-built Japanese Empire. On 25 March 1949, the 27th Ordnance Medium Maintenance Company was redesignated as the 27th Ordnance Maintenance Company.

On 18 July, the 1st Cavalry Division was ordered to Korea. Initially scheduled to make an amphibious landing at Inchon, it was redirected to the southeastern coast of Korea at Pohang-dong a port 80 miles north of Pusan. The North Koreans were 25 miles away when elements of the 1st Cavalry Division swept ashore to successfully carry out the first amphibious landing of the Korean War. The 5th Cavalry Regiment Combat Team marched quickly toward Taejon. By 22 July, all regiments were deployed in battle positions; in itself a remarkable logistical achievement in the face of Typhoon Helene that pounded the Korean coastline.

On 27 November 1951, the advance party from the division left Korea and by late January 1952, all units had arrived on Hokkaido, under the command of Major General Thomas L. Harrold. Arriving in the port of Muroran, each unit was loaded on trains and moved to the new garrison areas. Three camps were established outside Sapporo, the Islands capital city. The division controlled a huge training area of 155,000 acres. The mission of the division was to defend the Island of Hokkaido and to maintain maximum combat readiness. On 1 January 1953, the 27th Ordnance Maintenance Company was reorganized and redesignated Headquarters and Headquarters Detachment, 27th Ordnance Battalion. Organic elements were concurrently constituted and activated.

In September 1954, the Japanese assumed responsibility for defending Hokkaido and the First Team returned to the main Island of Honshu. For the next three years the division guarded the northern sections of Honshu until a treaty was signed by the governments of Japan and the United States in 1957. This accord signaled the removal of all U.S. ground forces from Japan’s main islands.

On 20 August 1957, the 1st Cavalry Division, guarding the northern sections of Honshu, Japan was reduced to zero strength and transferred to Korea (minus equipment). With the advent of the Pentomic Organizational Structure, the 27th Ordnance Maintenance Battalion was assigned to the forerunner of the Divisional Support Command, the Divisional Trains. Although the concept of “Trains” under a controlling headquarters was new to the infantry divisions, it had been utilized by the Armor during World War II. The organic units, at the time of activation of the Trains on 22 August 1957, included the 15th Aviation Company, 15th Administrative Service Company, 15th Medical Battalion, 15th Quartermaster Company, 23rd Transportation Battalion and the 27th Ordnance Battalion.

On 1 November 1957, the Trains were activated in Korea. The redesignated and reorganized First Cavalry was assigned the mission of patrolling the “Freedom’s Frontier” (DMZ). In addition to their assigned duties of patrol along the southern border of the DMZ, training remained a number one priority for the Troopers and unit commanders. In January 1958, the largest training exercise in Korea since the end of hostilities, Operation Snowflake, was conducted. This exercise was followed by Operation Saber in May and Operation Horsefly in August. In June 1965, the 27th Maintenance Battalion began rotation back to the United States along with other units of the 1st Cavalry Division.

In 1965, the 27th Maintenance Battalion accompanied the Division Support Command when it was deployed to Vietnam from Savannah, Georgia aboard the USNS Upshur. After a 30 day voyage, the battalion arrived on 15 September and was immediately transported to the base camp at An Khe by helicopter to begin its role of division support. The months of September and October were spent receiving equipment and establishing semi-permanent bases throughout the operational areas of the division.

During 1966, the battalion, in addition to the supply operations, had also completed more than 22,000 maintenance jobs. Some of the most important of those were done on 105 mm howitzers and division vehicles. In 1967, the battalion initiated a policy of training personnel in specific MOS categories before sending them to the forward detachments. Primary emphasis was placed on unique airmobile equipment, since many had no prior experience with these particular items.

The battalion initiated a 20 hour course in maintenance for motor officers and NCOs in all units of the division. In turn these students taught their personnel, which aided greatly in keeping vehicles rolling throughout the Division. The ever increasing efficiency of the battalion was evidenced in 1968, when nearly 68,000 maintenance jobs were completed. The battalion continued their participation in all major campaigns and distinguished itself in battle, writing new chapters in its history.

26 March 1971, officially marked the end of duties in Vietnam for the majority of the 1st Cavalry Division. On 29 April, the Support Command Along with the 27th Maintenance Battalion departed Vietnam for Fort Hood, Texas.

On 15 September 1985, the 27th Maintenance Battalion was inactivated at Fort Hood, Texas. The 27th Maintenance Battalion had maintained its dedicated and professional support to the First Team willingly for almost 64 years before being deactivated and reorganized into the 4th Main Support Battalion on 20 June 1985. Elements of the 15th Medical Battalion and the 15th Supply and Transport Battalion were concurrently reorganized into this new battalion. Although shortly lived, the 4th Main Support Battalion quickly established itself as a dedicated and successful support unit in its superior support of the 1st Cavalry Division at numerous field exercises and several National Training Center Rotations at Fort Irwin, California.

In August 1990, the 1st Cavalry Division was alerted for deployment to Southwest Asia as part of the joint forces participating in Operations Desert Shield. The focus at the time was the defense of Saudi Arabia against potential Iraqi attack. Arriving in Saudi Arabia in September 1990, the 27th Support Battalion moved to Northern Saudi Arabia, West of Hafar Al Batin. At the start of the ground war, a heavy forward support team moved into Iraq and set up operations and logistical release point near the Kuwaiti border.

In March 1991, after successfully supporting the 1st Cavalry Division, the 27th Support Battalion (MAIN), along with the balance of the DISCOM Units, joined the assembled division on the plain of the Wadi al Batin. Desert Storm was over. In April 1991, the Division brought its Soldiers safely home to Fort Hood, Texas.

Returning to Fort Hood, Texas, the Battalion began an intensive recovery period to reconstitute the division for its contingency force mission. Maintenance and supply activities continuously operated for more than six months to return the Division to its full readiness posture.

Upon completion of wartime recovery operations, the Battalion began to train intensely on collective tasks to be prepared once again to support the division in any requirement or mission. The battalion has deployed units, Soldiers and equipment in support of every division exercise, including four deployments to Kuwait, three to Somalia, two to Central America, two to the Caribbean and over 12 to the National Training Center as well as numerous other support missions within the United States.

The battalion was inactivated along with the Division Support Command on 6 July 2005 at Fort Hood, Texas but only for a short time. On 18 October 2005, the 27th Main Support Battalion was redesignated and activated as the 27th Brigade Support Battalion, 4th Brigade, 1st Cavalry Division at Fort Bliss, Texas under the Army’s modularity transformation reorganization. The Battalion provided all logistical support to combat units assigned to the 4th Brigade Combat Team.

The 27th Brigade Support Battalion was inactivated at Fort Hood, Texas on 17 October 2013 in a ceremony conducted on Cooper Field.

Lineage and Honors of the 2nd Battalion, 19th Field Artillery