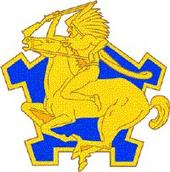 A gold color metal and enamel device 1 1/8 inches (2.86cm) in height overall: An Indian in breech clout and war bonnet, mounted on a galloping pony, brandishing a rifle in his right and holding a single rein in his left hand, all in gold, displayed upon a five-bastioned fort in blue edged with gold.

The five-bastioned fort was the badge of the Fifth Army Corps in Cuba, of which the Ninth Cavalry was a part. The yellow outline is for the Cavalry, and the blue for active service in the Spanish-American War. The mounted Indian represents the Indian campaigns of the Regiment.

Shield: Or, on a pile Azure in Chief a sun of eight points of rays between three five-bastioned mullets two and one of the field, in base overall the blockhouse of San Juan Hill, Santiago, Cuba, Proper.

Crest: On a wreath of the colors a horseshoe with nine nail holes heels down Argent winged Purpure debruised by two arrows in saltire Sable armed and flitted Gules.

Shield: The regiment was organized in 1866.  The field is yellow for the Cavalry and blue triangle with the sun and three five-pointed stars are from the old flag of the Philippine Insurrection with a change of color.  The three stars represent the three tours of duty in the Islands.  The blockhouse is the old pride of the regiment, a representation of the actual one which was taken at San Juan, Santiago, Cuba, in 1898.  The wedge is blue in color and recalls the fact that the 9th split the Spanish line at Santiago with the capture of the blockhouse when they charged dismounted as Infantry.

Crest: The crest is the well-known Scotch device signifying the alertness of the mounted man and the arrows are for the old Indian campaigns of the regiment.