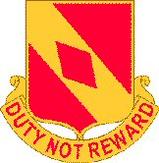 On a gold color metal and enamel device 7/8 inches in height overall consisting of the shield from the coat of arms blazoned: Gules, on a bend Or a fusil of the field. Attached below the shield is a gold scroll inscribed “DUTY NOT REWARD” in red letters.

The regiment was organized in 1917 and served in France in the 5th Division, primarily in Lorraine. The shield is red for artillery, with a gold bend from the arms of Lorraine and the red diamond of the 5th Division.

Shield: Gules, on a bend Or, a fusil of the field.

Crest: On a wreath of the colors, Or and Gules, issuant from base a demi-trident with prongs in the form of a fleur-de-lis of the First, looped about its shaft with ends upturned and forked a ribbon of the Second edged Vert.

The symbolism for the shield is as described above for the distinctive unit insignia. The golden trident on the crest simulating a fleur-de-lis refers to the unit’s participation in the D-Day landing at Normandy, which was known as Operation Trident. The ribbon is in the colors of the Belgian Fourragere for which the unit was twice cited for action in Belguim and the Ardennes.