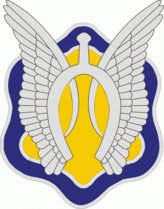 A silver color metal and enamel device 1 1/8 inches (2.86 cm) in height overall consisting of a hurt wavy of six voided similarly or superimposed by a silver winged spur.

The winged spur is emblematic of cavalry and speed. The blue ribbon alludes to service with the American Expeditionary Forces.

The distinctive unit insignia was approved on 28 June 1923. It was amended to revise the description and symbolism on 15 September 1987.

Shield: Per bend Tenné and Vert, in sinister chief a demi-unicorn and in dexter base a demi-horse both rampant Argent.

Crest: On a wreath of the colors Argent and Tenné superimposed on a hurt wavy of six voided similarly Or a winged spur Argent.

Shield: The shield is taken from the coat of arms of the parent organizations: The First, Third, Sixth, Eighth and Fourteenth Cavalry Regiments. The orange is representative of the uniform facings of the First Cavalry (the old First Dragoons), and the green alludes to the uniform facings of the Third Cavalry (the old Mounted Rifles). The demi-unicorn is taken from the shield of the Sixth Cavalry and the demi-horse from the Eighth Cavalry. The diagonal line is symbolic of the Fourteenth Cavalry.

Crest: The winged spur is emblematic of cavalry and speed. The blue ribbon alludes to service with the American Expeditionary Forces.