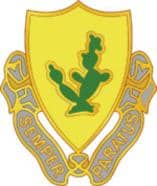 A Gold metal and enamel device 1 5/32 inches (2.94 cm) in height consisting of a shield blazoned: Or, a cactus Vert. Attached below and on the sides of the shield a Gray scroll inscribed “SEMPER PARATUS” in Gold.

This Regiment was organized at Fort Sam Houston, Texas, in 1901, and spent its first two years at that post. The cactus shows the birthplace of this Regiment, as well as its service on the Mexican border. The motto translates to “Always Ready.”

The distinctive unit insignia was approved on 22 October 1957.

Shield: Or, a cactus Vert.

Crest: On a wreath Or and Vert, in front of a wreath of palm branches Proper and superimposed upon a Melanesian war club and a kampilan in saltire Gules, a sun in splendor of eight rays of the first, in chief issuant from a bar wavy Azure a Japanese torii of the fourth enclosing a horseshoe Sable nailed of the first.

Shield: The Regiment was organized at Fort Sam Houston, Texas, in 1901, and spent its first two years at that post. The cactus shows the birthplace of this Regiment, as well as its service on the Mexican border.

Crest: The palm branches represent two Distinguished Unit Streamers awarded the unit for campaigns on Leyte. The sun, adapted from the arms of the Philippines, denotes award of the Philippine Presidential Unit Citation. The kampilan, a weapon of the Moros, is for early tours of duty during the Philippine Insurrection and the war club represents service in New Guinea and the Bismarck Archipelago where the 12th Cavalry also fought. The unit’s claim that one of its enlisted men was the first to enter Tokyo is noted by the horseshoe (suggesting Cavalry) within the Japanese torii, or temple gateway.